POUGHKEEPSIE, NY July 2, 2013 -- Thirty years ago, Rob Dyson raced a 1983 Firebird in his first professional race at the IMSA Coca-Cola Three Hours of Lime Rock. He had been racing in the SCCA since 1974 but moved into professional racing on that Memorial Day. Of the thirty-seven cars entered that day, only one team still racing today: Dyson Racing. The team will be officially commemorating their thirtieth anniversary at the American Le Mans Northeast Grand Prix at Lime Rock Park next weekend, July 5 - 6.

Many of the team's milestones over the past thirty years have occurred at Lime Rock Park, their home track with their shop less than an hour away. Two years after first running the 1983 Firebird, Rob Dyson moved up to an IMSA GTP Porsche 962 and debuted the car at Lime Rock in May of 1985 and won the first time out. The following year, the Lime Rock GTP race was the first professional pole for the team. The team also gave Mazda its first P2 victory at Lime Rock in 2009. And Lime Rock is special for Chris Dyson as he began his racing career here at the age of seventeen in the Skip Barber Racing School and scored his earliest SCCA victories. 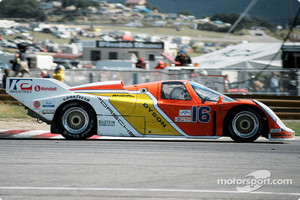 Recent years have seen the continuation of the team's winning ways at Lime Rock. Chris Dyson won the P1 pole in 2011, and Guy Smith set fastest lap on the way to a dominant win, the pair leading 165 laps of the 187 lap race. Last year, Guy Smith set a pole record and Chris and Guy finished second and the team won the Michelin Green X challenge.

From 1985 on, Dyson Racing continued to race the Porsche 962 during the golden years of GTP racing against the factory teams of Nissan and Jaguar and took home twelve wins and twenty additional podiums. In 1995, they moved to a Ford-powered Riley and Scott which netted them thirty-six wins over eight years including two 24 Hours of Daytona victories in 1997 and 1999 and several championships. From 2002 to 2006, they ran AER-powered Lolas and from 2007 to 2008, two Porsche RS Spyders in t he ALMS.

In 2009, the team partnered with Mazda in the ALMS. The team won at Mid-Ohio in 2010, giving Mazda its first overall IMSA/ALMS victory. In 2011, Dyson Racing ran the table of championships, winning a total of five including the Drivers Championship with Chris Dyson and Guy Smith, the Manufactures Championship with Mazda, the Team Championship and the Michelin Green X Challenge. Last year, Guy Smith's 0.083 margin of victory at Road America set the record for the closest ever overall finish in ALMS history. Also in 2012,Chris Dyson celebrated his 100th ALMS start at Baltimore and the team scored their 200th podium at Mid-Ohio.

"One of my favorite early memories was when we went to Lime Rock with the Porsche 962 for the first weekend and won," noted Chris Dyson. "It was such a great win. We were a small crew back then and to come with a family team and run against the best in t he business and win, that is when we realized we had a future at the highest level."

Rob Dyson won the first race he competed in, an SCCA regional at Watkins Glen, in a Datsun 510. "I remember when it was just me and Pat Smith. We would leave at 5:00 in the afternoon and drive all night to Nelson Ledges or Summit Point. We would sleep in the truck since we were too late for a hotel. I smile when I think about how much we did not know and how much we were learning every weekend.

Every chapter of our team's history has been different, but at all times, there has always been that one constant spark of emotion of absolutely wanting to compete with passion and to win." For over three decades, that overriding passion has never wavered.