This weekend sees the return of Elton Julian to the Long Beach Grand Prix, his home race and scene of his first American Le Mans Series victory last year. The 36-year-old DragonSpeed team principal will team up with Eric Lux in the number 63 Le Mans Prototype Challenge entry fielded by Genoa Racing and sponsored by Green Dot bioplastics and its Promoting Use of Renewable Energy (P.U.R.E.) campaign in the 37th running of the nation's premier street race. 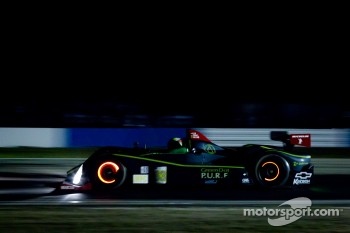 Julian's route from the ALMS season-opener at Sebring to Long Beach included an early April detour, in company with Genoa teammates Christian Zugel and Jens Petersen, to contest the opening round of the 2011 Le Mans Series at Circuit Paul Ricard in the south of France. After setting the fastest Formula Le Mans (as the class is known in Europe) time by a margin of 1.5s in practice for the six-hour race, Elton's first qualifying run since 1999 was stymied by a slow puncture which left him second on the FLM grid.

A chaotic start caused by a pace car miscue saw Christian Zugel set a new standard in 'keeping your nose clean' as the New Jersey-based German skillfully avoided the wreckage around him only to be hobbled by another gradually deflating tire, leading to a costly early pit stop. Countryman Jens Petersen then took over, taking the Genoa entry up to third by the end of his stint before spinning on another car's fluid spill on his in lap.

The Genoa machine was two laps down on the class leader in fourth when Zugel handed off to Julian after three and a half hours, setting the stage for another outstanding performance by the Californian ace. Over the next 2h30m, Julian clawed back all but 18 seconds of a nearly five-minute deficit -- lapping up to three seconds faster than the FLM leader and enjoying a brief spell in first place during the last round of pit stops -- to finish second in class and 13th overall of the 34 starters.

Zugel was thrilled to have earned a podium in his first-ever European race, and Julian was delighted with his return to Paul Ricard. "This track has so many memories for me, from French F3 and my F1 test in the 1990s to the first step in my comeback to sportscars in 2005. It's great that they kept so much of its character when they modernized it a few years ago," said Elton. "The Le Mans Series itself seems pretty healthy, and it was fun to run a race without yellows once we got past the start. We're aiming to win the prize of a 2012 Le Mans 24 Hours entry for the series' FLM class champion, and I can see pulling it off with the Genoa crew."

Live coverage from Long Beach, shortest round on the ALMS calendar at two hours, will be available online at www.espn3.com from 1615 PT on Saturday 16 April, with the entire race televised on ESPN2 at 1400 PT the following day.