October 16, 2012 (Los Angeles, Calif.) - This weekend's Petit Le Mans will mark the end of the 2012 American Le Mans Season. Looking to close out his first season with Dempsey Racing, and in the Prototype Challenge class, he is hoping that the 10-hour or 1000 mile race leads him to his third podium of the season. 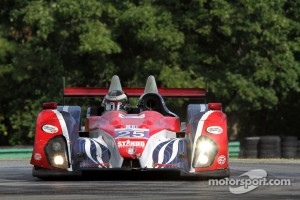 History is on his side. In two attempts at Petit Le Mans, Ende has one victory and a third place - with his victory coming in 2011 in the GT-C class when he co-drove with his teammate this year, Henri Richard. Richard and Ende will be joined this weekend by Ryan Lewis in the no. 25 Dempsey Racing Prototype Challenge machine.

However, Petit Le Mans will also mark Ende's final race as a free man, as he will marry longtime girlfriend Teri Silva in the off-season. Silva, who didn't believe that Ende raced cars when the two first met, will be in the Dempsey Racing pits throughout the weekend.

"Of course, both Petit Le Mans and my wedding are two of the biggest events of the year for me," said Ende. "But whereas Petit Le Mans will only last a thousand miles, my marriage will last much longer than that. I'm hoping we have a great race and can close out the year with another podium, which will make both Teri and I even happier before we tie the knot. As you can imagine, I'd like her to be as happy as possible..."

A large field of cars is promised for Petit Le Mans, and with even larger amounts of GT and prototype cars, traffic management will play a larger role than ever on the fast Road Atlanta circuit.

"The Prototype Challenge car is going to be a lot of fun around Road Atlanta," said Ende. "It's a very fast circuit with a short lap, and how you manage traffic will be a huge factor in how your race goes. There are three good passing zones for the prototype cars, but if you are held up a corner or two before, those passing zones go away. The Dempsey Racing guys have given us a great race car all year, and if we can keep our nose clean and stay out of trouble for the first few hours, we'll have a great race car for the finish."

Ende's preparation for Petit Le Mans included participating in team owner Patrick Dempsey's Dempsey Challenge, a bike ride in Lewiston, Maine that benefited The Patrick Dempsey Center for Cancer Hope & Healing at Central Maine Medical Center in Lewiston, Maine. As Specialized is not only a sponsor of the Dempsey Challenge, but of Dempsey Racing, Ende - along with his bride-to-be - ompleted the ride in very cold, 38-degree weather on a Specialized Venge.

"The ride was difficult, and I just hope Petit Le Mans isn't nearly that cold," said Ende. "It was a great experience for a worthy cause and I'm really glad I was able to take part. We wanted to do our part and raise some money for the Patrick Dempsey Center for Cancer Hope & Healing and hopefully we can continue to do that through our racing efforts at Petit Le Mans."