ESM appears to be moving to P2 before Sebring 12H

Extreme Speed Motorsports apparently is leaving their GTE Ferraris in the dust as they move to prototype racing in the American Le Mans Series.

It would seem odd for a top level team to accept their automatic invitation to compete in their first 24 Hours of Le Mans to now switch gears from racing one of their Ferrari F458 Italia in the GTE class to take on a new challenge. Yet that is what Extreme Speed Motorsports plans to do per John Dagys.

Not only will ESM be changing classes but they are making the move after the recent American Le Mans Series winter test in Sebring, Florida. Plus the first race of the season is just around the corner. Per SPEED.com's exclusive story, Dagys reported that Scott Sharp's ESM team will move to the P2 category instead of sticking with the Ferraris.

The team will now race two of the HPD ARX-03b cars powered by Honda. 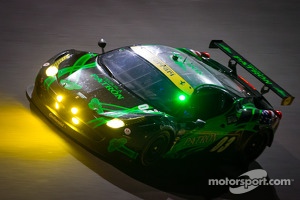 At the 24 Hours of Daytona, ESM ran a Ferrari 458, so one wonders ... will they keep one of the cars to enter a few more of the Rolex Grand-Am series this year.

Earlier today, Conquest Racing announced that they would leave IndyCar to concentrate fully on their entry in the ALMS; however team owner Eric Bachelart did not confirm that they would stay in the P2 class -- they were second in the 2012 championship -- he said that the team was "currently evaluating different programs for ALMS, in the P2, PC and GTC."

Prior to the recent test days in Sebring, Scott Tucker had announced that his Level 5 Team would not defend their P2 title this year. Perhaps he might reverse his decision.

With the unification between the ALMS and the Grand-Am series set for 2014, it is expected to see teams make decisions to go in a different direction than their original plans. However ESM is the first to switch from a production-based GT car to a prototype.