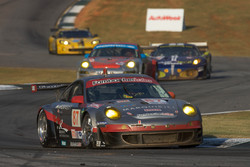 Porsche's stepped up partnership with Farnbacher Loles will also be seen in the Grand-Am Rolex Sports Car Series and IMSA-sanctioned Patron GT3 Cup Challenge, where the Braselton, Ga.-based squad will enter a brace of entries during the 2009 season.

"Everyone at Farnbacher Loles is proud to announce our partnership with Porsche for the 2009 American Le Mans Series season," team owner Gregory Loles said. "Many people have worked very hard to gain this recognition from our manufacturer."

For the Farnbacher Loles team, 2008 marked the debut of a season-long program in the ALMS. Werner teamed with a variety of co-drivers throughout the year, including Richard Westbrook and Bryce Miller, who helped steer the Michelin-shod entry to victory at Road America in August. On top of the class win, Werner earned two poles and three additional podium finishes.

With the addition of Henzler, who teamed with Jorg Bergmeister in the championship-winning No. 45 Flying Lizard Motorsports Porsche last season, Farnbacher Loles looks to be a serious threat for the title in 2009.

"I must express my personal satisfaction with the return of Wolf to our team," Loles said. "Wolf is more than a driver for our team; he is part of our family and history. Dirk has been our rock for the last couple of seasons and now he will have the consistence in co-driver we so desperately missed in 2008. Dirk, who is very special to us, now has the teammate he deserves in the American Le Mans Series. Dirk and Wolf will be a formidable combination in our car."

But before the drop of the flag on the ALMS season in March, the team will once again take part in the Rolex 24 Hours at Daytona, the season-opening round for the Rolex Series. A variety of drivers representing nine countries and five continents will strap behind the wheel of the team's six Porsches entered in the twice-around-the-clock January classic. 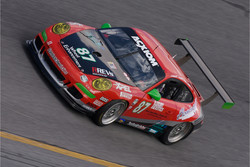 Werner, Henzler, Westbrook and Leh Keen make up the driving strength in the No. 87 Porsche, while Henzler is also down to drive the No. 85 entry with Michel Gomez, Daniel Graeff and Ron Yarab Jr. Westbrook, meanwhile, will also pull double duty, sharing the wheel of the No. 88 machine with Steve Johnson, Dave Lacey and Robert Nearn.

Dominik Farnbacher will lead the driving strength in the No. 86 Porsche, teaming with Eric Lux and Matthew Marsh. Italians Giacomo Petrobelli, Giacomo Ricci and Gabrio Rosa will share the wheel of the No. 89 entry with Robert Renauer and Allan Simonsen.

"We are confident with the additional resources now available to us, the 2009 season will bring many triumphs to our team," Loles added. "I must particularly thank Mr. (Hartmut) Kristen and Mr. (Paul) Ritchie for the confidence they are showing in our team. We will not disappoint them."