Flying Lizard next visits the racetrack at the 7th round of the 2013 ALMS season for the Grand Prix of Baltimore on August 30th and 31st. 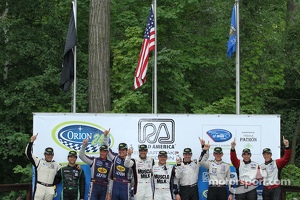 Significant rain throughout race morning meant that both cars started the race on rain tires in very damp conditions. Both cars changed to slicks at the 40-minute mark, with the No 45 changing drivers to Spencer with one and a half hours remaining in the race. In the No 44, Seth stayed in until Dion took over for the final run to the finish.

The No 45 ran in the top three throughout the race and took the lead into the final yellow which saw the race end under caution. Dion started his final stint in 7th but was able to move up to 5th by the finish.

Dion talked about the team's results, saying "First off congratulations to Spencer and Nelson and the whole Flying Lizard team on another fantastic win. The No 44 had a mixed day – we had a really good long run car but in my first short run coming off of the yellow we had trouble getting heat into the front tires.

Seth did a great job today, giving me the car on the lead lap, and I thought we might be able to get onto the podium but had a solid top-5 result nonetheless. We have made another good step forward though and will come back fighting at Baltimore. With a few more positions we can make it onto the podium."

Spencer described the No 45's race, adding "Nelson did an awesome job in very trying conditions, which he handled brilliantly in a fantastic opening stint. Our pits stops were great today and our strategy put us towards the front with a chance at a win. We had a strong car at the end of the race and all of the work that the Flying Lizard guys did this week paid off as we were able to bring it home in first place."

Flying Lizard next visits the racetrack at the 7th round of the 2013 ALMS season for the Grand Prix of Baltimore on August 30th and 31st.

Dyson Racing is second on Round 6 at Road America