This Week in Ford Racing 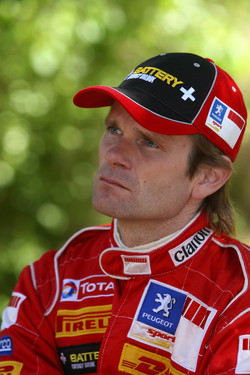 -time WRC champion Marcus Gronholm has agreed to drive the Best Buy Ford Fiesta for Olsbergs MSE in the opening round of the Global RallyCross championship at Irwindale Speedway March 26-27. Gronholm, who drove two seasons for Ford in the World Rally Championship (2006-07), officially retired following the 2007 season. Since then he has kept busy with one-off events like Pikes Peak International Hill Climb in 2009 and by running a handful of European RallyCross events. Gronholm chatted with a group of journalists shortly after the announcement and This Week in Ford Racing was there to get his thoughts on the GRC debut.

MARCUS GRONHOLM – DO YOU SEE YOUR INVOLVEMENT IN THIS ACTIVITY AS SOMETHING TO HELP SELL THE SPORT TO THE UNITED STATES, OR IS THIS SOMETHING YOU JUST WANT TO DO AS A COMPETITOR? “I think both. Of course I want to drive, but also I want to help start something new and make it big, I hope. Mostly I want to drive again.”

IF YOU DRIVE AGAIN WOULD THAT BE JUST IN RALLYCROSS OR WOULD YOU CONSIDER WRC WHERE YOU ALREADY HAVE TWO CHAMPIONSHIPS? “No for the WRC, which I already made a decision a few years ago that I had to stop. I still like to drive something, so RallyCross is really nice and also the chance to come over to the USA is new for me so it is interesting.”

CAN RALLYCROSS BE A DESTINATION SPORT INTERNATIONALLY OR IS IT JUST SOMETHING PEOPLE WILL DO AS AN ASIDE TO SOMETHING ELSE THEY HAVE IN THEIR CAREER?“I think it [RallyCross] is quite a nice sport. For the spectators it is good because it is easy to attend and easy to see for TV it is good. For drivers, I have done a few races here in the Europe Championship, and it is quite interesting. It is quite hectic and quick. You have to have quick reactions for a good start and there are a lot of cars at the same time and a lot of pushing and fighting.”

SOME OF THE BEST RALLYCROSS DRIVERS ARE OLDER. DOES RALLYCROSS REQUIRE A LOT OF EXPERIENCE AT THE SPORT OR SOMETHING ELSE TO BE REALLY GOOD? “I don’t know why the best drivers seem to be older. Maybe it is because they can keep calm and not get crazy like the younger drivers when they are twenty. I know I had a lot of problems when I was 20 to 25 but then it got a lot better as I got more experienced and older. They are old stories, but there were times when you had a good position in a rally, a second or third, yet I wanted to win and you end up in a crazy position and miss out because of mistakes.”

HOW DO YOU FIND THE COMPAIRISON BETWEEN THE STYLE OF DRIVING IN WRC AND RALLYCROSS? WHAT DO YOU NEED TO DO DIFFERENTLY IN YOUR DRIVE AND HOW MUCH OF IT IS TRANSLATABLE?“In the first races I did in RallyCross it was difficult for me because you have to follow others and you can get stuck behind someone so the start is very important. If you miss the start then you are behind everybody. That is different. In rally you are alone on the stage and you can catch up and a little bit of time here and there. In RallyCross you don’t have time. You have to be good from the start and not make mistakes. The cars are a bit different. Here in RallyCross the cars have more power, much more, but they aren’t so easy to drive. The WRC car is much easier to drive.”

YOU MENTIONED A FEW MINUTES AGO THAT YOU WERE LOOKING FORWARD TO DOING SOMETHING NEW AND HELPING BUILD SOMETHING. DOES THAT MEAN WE WILL SEE YOU AT A FEW OF THESE GLOBAL RALLYCROSS EVENTS OR IS THIS A ONE OFF? “It depends a little bit of how much I enjoy here in the first one. Can we find the budget for the rest of the rest for me to drive? I don’t know for the moment. Everything came very quickly together for this one so I am not that well prepared because I haven’t seen the Fiesta for a couple of years. It is a little bit of a funny situation, but I think it will be ok if we get a small test before.”

WHEN DO YOU ANTICIPATE THIS TEST AND HOW MUCH TIME WILL YOU HAVE WITH THE CAR? “For the moment I don’t know when I am even flying to the US, but it will be a few days before the event.”

HOW DOES IT FEEL COMING TO NORTH AMERICA WITH FAN REACTION A BIT DIFERENT THAN WHAT YOU RE USED TO IN EUROPE? DOES NOT HAVING AS MUCH ATTENTION MAKE IT EASIER FOR YOU TO FOCUS ON THE DRIVING?“I think it will be fine. I hope there will be a lot of spectators and people for the first one [GRC event]. I will focus on driving and I hope that we get everything correct in the test before so I can start with a good result.”

YOU DROVE AN OLSBERGS MSE FORD FIESTA AT PIKES PEAK IN 2009. SINCE PIKES PEAK THE FIESTA HAS BEEN HERE IN THE US AND HAS WON THE 2009 X GAMES WITH KENNY BRACK AND SWEPT DOUBLE GOLD AT X GAMES LAST YEAR WITH TANNER FOUST. WHAT DO YOU REMEMBER ABOUT THE FIESTA FROM PIKES PEAK?“At Pikes Peak we had a lot of horsepower and the Fiesta was really nice car to drive, but we had a little problem with the turbo as we climbed up Pikes Peak. Now it is completely different [at sea level] and I think it will be good.”

HAVE YOU EVER JUMPED A CAR OVER A 70 FOOT MAN MADE JUMP BEFORE? “I have never jumped over an open gap. I think the jump in Global RallyCross is an open gap. So I am little bit nervous, but I hope everything will go ok. I don’t know what will happen when we are in the traffic trying to take the jump. Let’s see how it will be.”

ARE YOU WILLING TO BUMP GUYS OUT OF THE WAY WHEN YOU ARE IN TRAFFIC? I HAVE SEEN RALLYCROSS AND IT IS FENDER TO FENDER, GUYS HITTING EACH OTHER. ARE YOU WILLING TO GET IN THERE AND GET DIRTY AND THROW SOME ELBOWS IF YOU NEED TO “Yes of course. It is nice to follow the rules and not push too much. I think you can touch a little bit but not too much. It is fun and I am looking forward to coming to the US and driving again.”

HOW DOES YOUR APPROACH TO COMPETEING CHANGE WHEN YOU ARE DOING IT IN ARTIFICIAL CONDITIONS HEAD-TO-HEAD AS OPPOSED TO OUT IN A WOODED RALLY STAGE? “It is more nervous for this one. When you are standing on the start line with everybody it is completely different. In rally you are alone in the forest with your co-driver listening to the notes, now I am alone in the car. I did a few races in RallyCross in Europe so it isn’t really a problem. Before my rally car career I did motocross for many many years, so I am used to the fight and many bikes at the moment and now a few cars.”

THE FIESTA YOU WILL DRIVE IN THE GLOBAL RALLYCROSS HAS 600 HORSEPOWER AND YOU SAID IT IS HARDER TO DRIVE THAN THE WRC CAR THESE DAYS. SPEAKING AS A CHAMPION IN THE SPORT, WOULD YOU LIKE TO SEE RALLYING GO BACK TO THE BIGGER MORE POWERFUL CARS? “No. All the drivers would like to have more power, but it will not happen now in WRC they have gone down in power a bit just to attract more manufacturers to have more possibilities to come in. They don’t want to go up with the horsepower because everything gets more difficult and more budget.”

WHILE YOU ARE KNOWN PRIMARILY AS A RALLY DRIVER YOU HAVE RALLYCROSS EXPERIENCE IN THE EUROPEAN RALLYCROSS. CAN YOU DETAIL YOUR RALLYCROSS BACKGROUND? “I don’t have so much experience, but when I stopped my WRC career I did three races in the European Championship and maybe I was lucky, but I won my first ever RallyCross in Sweden and then I had two other races where I wasn’t very good. In fact I was on my roof in one of them. Yes I do know how to drive in races like this, but it is still quite different from rally.”

YOU HAVE BEEN TO THE STATES BEFORE AND YOU HAVE LOOKED INTO WHO YOU WILL BE COMPETING AGAINST. WHO DO YOU THINK WILL BE THE TOUGHEST COMPETITION FOR YOU? “Exactly I don’t know, but I think maybe Tanner Foust (ROCKSTAR Ford Fiesta) will be quite quick. He drove the European [RallyCross] Championship last year and he has a lot of experience so he is quite fast. “ Back to Top

Having fewer Moto3 bikes in 2017 a boost, says Mahindra

Martin on high with Moto3 results in second half of 2016