Road Atlanta, 30 September 2011. With another enthralling American Le Mans Series set to draw to a close this weekend at Petit Le Mans, Aston Martin Racing will start the legendary endurance race from 8th (3rd in the unofficial petrol class) in the highly competitive grid of 58 prototype and GT racers. 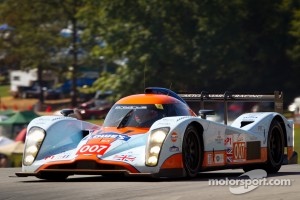 Fresh from the factory team’s popular victory at Laguna Seca two weeks ago, the 007 DBR1-2 will begin its fight from the fourth row of the grid. Stefan Mücke (D) set a fastest time of 1:10.485, just three tenths of a second behind the fastest petrol competitor around the 2.54 mile Road Atlanta circuit in the Lowe’s sponsored LMP1 car.

Petit Le Mans also forms the penultimate round of the Intercontinental Le Mans Cup, and so plays host to a fleet of diesel-powered LMP1 racers.

Team Principal, George Howard-Chappell said: “I am happy with our position today; it is a long race tomorrow and we’ve had a good amount of running to acclimatise ourselves to this circuit. “The drivers are reporting that the car’s setup is about optimum at the moment, and we will aim to stay out of trouble on what will be a very busy circuit.”

Mücke who qualified the car said: “I had a bit of traffic during the qualifying period, but no surprises there. The car ran really well, it was perfectly balanced and I have to say thanks to the team as they have done a brilliant job.

“I think we have to be happy with P3 in the ‘petrol’ class, we are not far off the pole petrol. It’s a long race and I am really looking forward to it.”

Drivers, Adrian Fernandez (MEX), Harold Primat (CH) and Mücke completed an initial practice session on Wednesday afternoon ahead of three further sessions on Thursday. The final session of the day gave the team an opportunity to test the DBR1-2 in night conditions, part of which, was an obligatory 3-lap qualifying stint for each driver.

A final opportunity to perfect the car’s set-up came five hours before qualifying. The Gulf-liveried V12 coupe and its Muscle Milk Racing sister car both completed each practice session within the top 11.

The 10 Hours of Petit Le Mans gets underway at 11.30 (EDT) on Saturday 1 October and will draw to a close when the leading car completes 1,000 miles (approximately 394 laps), or when 10 hours has passed. Television coverage of the race will be shown live on ESPN 3.