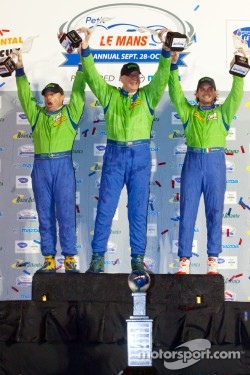 Krohn Racing captured their second GTE-Am class victory of the season in the Intercontinental Le Mans Cup (ILMC) series at their home track of Road Atlanta in the 14th annual Petit Le Mans Powered by Mazda race, October 1. The Petit Le Mans race was a combined event of both the ILMC and the finale for the American Le Mans Series (ALMS).

A fast and well-prepared car, steady and smart driving by the trio of Krohn Racing team owner/driver Tracy W. Krohn, Nic Jönsson and Michele Rugolo and the ability to stay out of trouble were mitigating factors in the popular class victory.

TRACY W. KROHN, Krohn Racing Team Owner/Driver, No. 57 Krohn Racing Ferrari 430 GTE-Am:
“It’s just great to win at your home track and in one of maybe the most difficult races we’ve done all year. This race was pretty intense. The whole race strategy was to stay on track, avoid the faster cars and still keep your pace. It’s really hard to do that. Nic did great, Michele did great, David, Jeff and the whole team did great. This is a team effort. Everybody has to make the effort work – from the guys working the tires, the guys working in the front office to the guys driving the car. Everybody has to make this work together. I’m so proud to be on the podium at Road Atlanta and win a race as prestigious at Petit Le Mans.”

NIC JONSSON, No. 57 Krohn Racing Ferrari 430 GTE-Am:
“It was phenomenal to have won on our home turf since Krohn Racing is based in Atlanta, and actually at Road Atlanta. To be able to take another win here in the United States, with the first being our victory at Sebring, and now Petit Le Mans. Those are two of the three biggest races in the world. The only one we missed winning this year was the 24 Hours of Le Mans, because of a mechanical failure when we were leading. We will go to China in a month and hope to finish the season with another win. This is unbelievable. The entire Krohn Team has done an amazing job on maintaining the car. Every pit stop was flawless and Tracy and Michele did a great job in the car today. The race was exactly what we thought – you had to stay out of trouble. Race Engineer David Brown did a great job getting the car set up as well so that we had a good, fast car when we needed it to put guys down a lap while still preserving the car. It feels awesome to me to win on the home turf. I had my Mom and Dad here from Sweden and my little son, Max, and my wife Helene. I’m really, really happy for this victory!”

MICHELE RUGOLO, No. 57 Krohn Racing Ferrari 430 GTE-Am:
“For this race, we actually had not done anything different compared to what we had done for Le Mans and many other races. The team has been perfect. The pit stops have no mistakes. This weekend the car was very good. It’s actually difficult to find the best lap because we started the race at 11:30 in the morning and we finished late in the evening and the track kept changing. For sure we found the best compromise for the majority of the hours of the race. I want to thank David for the good balance of the car and to the guys for the awesome pit stops with no mistakes. It was always perfect and not a problem with a single tire. We were very consistent and very fast as well. There was a small accident where I was involved with the car, but I was hit by another car. I think everything has been the way it had to be in order to win.”

DAVID BROWN, Krohn Racing Team Manager/Race Engineer:
“We had a fast car all weekend. All three drivers drove absolutely brilliantly. Each time we changed tires and put a new driver in the car, they drove excellently. Tracy was a major contributor to today’s win. Our strategy was sound. We took advantage of the cautions, and there were several. Our car was fast and reliable. We had zero issues. The pit stops were perfectly executed by the crew. They did an outstanding job, as always. We have a really good tire company in Dunlop and they provided us with exactly the right tires for the conditions of this race and you could tell by how we were able to put in such good lap times that the tires worked very well here. There was some pressure on us to perform, being the home team, but I don’t think anybody performed any differently. We tried to treat it like just another race and it worked out very well. We were all very, very happy. We’re really looking forward to going to Zhuhai.”

JEFF HAZELL, Krohn Racing Motorsports Manager:
“It’s very sweet for the team to win at home on the track we know so well and with so many guests and friends here. It is also sweet because the team is made up of such an international group of specialists, drivers and technicians and they all come together to work in Atlanta and to pull off a victory here at home for all those people is particularly special. In addition to good car for the race, we had particularly increasing support from Michelotto and a great deal of engineering confirmation with Dunlop Tires throughout the weekend and both those things played a big part in the success. We are the only American team in this global championship that has attended every event. The next stop is Zhuhai, China, where we should be able to fly the American flag again on the Ferrari.”

The final race of the season for Krohn Racing is the 6 Hours of Zhuhai, Zhuhai, China, the ultimate round of the 2011 Intercontinental Le Mans Cup Series.