The sixth round of the Intercontinental Le Mans Cup, Petit Le Mans - Road Atlanta is an unusual, complex, spectacular and fast race. Team Peugeot Total will compete in this event for the fourth time with the chance of securing a second consecutive manufacturers’ title. Up against some very tough opponents and in a series which goes from strength to strength with every round, Peugeot will need to score 13 points to secure the title ahead of November’s final round in China.

“We are having a great season.

The battle for victory intensifies with every race. The pace quickens. The cars are very close to one another in terms of performance, but the determination of the team during pit stops and the dogged determination of the drivers in their on-track battles provide ample evidence of the high standards on offer during this 2011 season, with a very tough rival. Team Peugeot Total has collected a series of race wins and points since the start of the season and hopes to go all the way by picking up the 13 points it needs to win the final Intercontinental Le Mans Cup before the series becomes the FIA World Endurance Championship in 2012.

“We are having a great season”, reiterates Olivier Quesnel, Peugeot Sport Director. “It is worth underlining the exemplary reliability of our cars so far, because the only mechanical repairs that have been carried out during the races were due to racing incidents. The Peugeot 908s have made it to the end of every race they have taken part in, and that is one of the keys to our success. We now lead the Manufacturers' and Teams’ standings, with two rounds to go. We hope to keep our momentum going and demonstrate in the USA and especially in China the full potential of the Peugeot cars and the team. We have a clear goal: win the championship and win races.”

“Given the incredible pace at which the races have been run at each ILMC round this season, there is every reason to expect another intense race”, predicts Bruno Famin, Peugeot Sport’s Technical Director. “The standard moves up a notch at every race. We must therefore continue to work on all areas, because every little detail counts. Petit Le Mans is a very difficult race, because your race strategy has to be constantly adapted according to, amongst other things, the safety car periods. Sure, we only need to score 13 points to win the championship, but once the race is underway, it will be one ‘almighty scrap’. We’ll have to fight every step of the way if we want to win, but also to make sure the cars finish the race. Just like we did at Silverstone, where the team showed exceptional determination, during the pit stops, on the track where we saw some fantastic driving, and even off the track, with the determination of Franck Montagny. After he went off at the beginning of the race, he demonstrated incredible tenacity to move the car off the gravels, getting out of the car twice to call the stewards and attempting to move the 908 himself!” 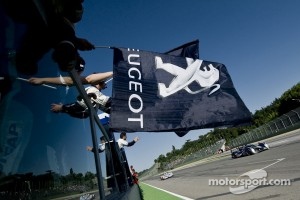 The same two Peugeot 908s head off for the USA, after being given a thorough service on their return from England. With an average speed of around 215kph, the Road Atlanta racetrack is as quick as Spa- Francorchamps whilst the cars are at full engine load for close to 75% of the race, a ratio almost identical to that at Le Mans. This is why the aerodynamic set-up will be halfway between the set-ups used at these two tracks.

In order to prepare as well as possible for this event, much loved by Team Peugeot Total for its specific features and its strategic complexity, Peugeot has scheduled two test days on Sunday 25 September and Monday 26. The team will then get into the specific context of the meeting, especially with the incredible amount of traffic to deal with during free practice, qualifying and the race itself.

Road Atlanta is a very unusual track and has a truly unique atmosphere. This hilly four-kilometre track, featuring 12 corners, is covered in a little over a minute by the prototypes. With 60 cars on track during free practice and qualifying, and 53 in the race, traffic is set to play a decisive role. The safety car periods will also be key, of which there are likely to be many during the race’s 1,000 miles or 10 hours. Last year, there were no fewer than nine safety car periods!

With two one-two finishes from three entries, Team Peugeot Total knows all about the particular demands of this race. The last two editions were both very closely contested, but also very different from one another. In 2009, Peugeot achieved a one-two with Franck Montagny and Stéphane Sarrazin winning from Pedro Lamy and Nicolas Minassian, after a race that was cut short by several hours due to torrential rain. In 2010, this time after a cut-throat race with Audi, the trio of Franck Montagny, Stéphane Sarrazin and Pedro Lamy took the win, ahead of Anthony Davidson, Alexander Wurz and Marc Gené.

In the Peugeot 908 no.7 (blue mirrors), Anthony Davidson, Sébastien Bourdais and Simon Pagenaud will be looking for their first win at Road Atlanta. For Sébastien Bourdais, winner this season at Imola and at Silverstone, this will be his first outing at this track in a Peugeot! Anthony Davidson (2nd in 2010), back to racing after recovering fully from his bike accident, and Simon Pagenaud, Peugeot’s “local” driver, will be looking to secure a second win of the season in the Peugeot 908. 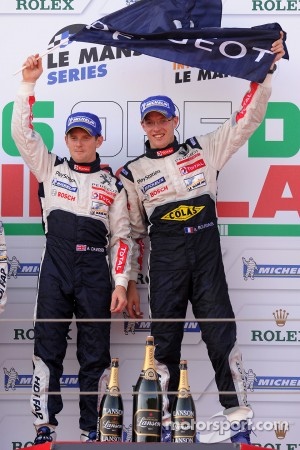 The Peugeot 908 no.8 (white mirrors) will be entrusted to Franck Montagny, Stéphane Sarrazin and Alexander Wurz. Returning to the series for the first time since the 24 Hours of Le Mans, the Austrian teams up with the two-time winners of the race. The three drivers have never raced together before, although Wurz and Sarrazin were team-mates in 2008 at the 24 Hours of Le Mans.

Just like at Sebring, Spa and Le Mans, Peugeot will also be represented by the Peugeot 908 HDi FAP entered by Team Oreca Matmut, winner at Sebring in the year’s first race. The car will as usual be driven by Nicolas Lapierre, who will be joined by two factory Peugeot Sport drivers, Marc Gené and Nicolas Minassian.