The Petit Le Mans race at Road Atlanta had the largest entry ever due to the fact it was not only the season finale for the American Le Mans Series but it was also the penultimate round for the Intercontinental Le Mans Cup. Teams from the world came to be on center stage including the two titans, Audi and Peugeot, with their diesel-powered engines and their cutting edge technology.

The 14th running of the Petit Le Mans saw the crowning of the ILMC champion. Stephane Sarrazin drove the final stint for the Peugeot No. 8 and took the 908 to not only the victory but also he and Alexander Wurz and Franck Montagny notched the ILMC championship for the French manufacturer. In the first two seasons of the prestigious award, Peugeot is the sole LMP1 title holder.

Our engineers did a great job this weekend and gave us a great car.

It was not a perfect day for the Peugeot team as their pole winning No. 8 car was out early due to mechanical issues after completing 78 laps of the 1,000 mile or 10 hour event; whichever came first. Anthony Davidson, Simon Pagenaud and Sebastien Bourdais could only sit idle and cheer on the No. 7 Peugeot 908.

The race had 10 cautions which slowed the field down quite a bit so it was not even close to the record finish. The final caution might have ended the race under yellow but the cleanup crew did a great job and with less than 30 minutes before the 10 hour mark, the green flag waved with just before the 1000 miles would be completed. Sarrazin only had to put three more laps into the book to take the win.

Sarrazin was more than happy to take the win for the No. Peugeot 908. “It meant a lot to get the championship here,” he said. “The focus was to finish the race. Franck and Alex were very fast. Traffic was tough at the end. There was a lot of drivers lost on the track toward the end. I tried more to not touch cars during over-taking. Audi team were really fast. It was a tough race. Our engineers did a great job this weekend and gave us a great car. It shows a good team. I'm happy for this win.

The top seven overall were all racing for the ILMC points and except for one LMP2, they were LMP1 teams which is the fastest class out of the seven sportscar classes. Taking second overall was the winning team at the season opener in Sebring. The ORECA-Matmut Peugeot of Nicolas Lapierre, Nicolas Minassian and Marc Gene. Third went to the Aston Martin Racing team with drivers Harold Primat, Stefan Mucke and Adrian Fernandez.

While many of the entries were contesting the ILMC title points, other teams from the Le Mans Series also paid a visit to Georgia. Add to the mix the season-long ALMS teams and it did make for a lot of traffic which led to more than the usual contacts.

It was not a good outing for the German powerhouse team as neither Audi were running at the finish. After the race, Dr. Wolfgang Ullrich stated: "I’m very disappointed. We were battling for victory for seven hours and were leading several times. Our best car and the best Peugeot were always just separated by a few seconds. Unfortunately, Romain Dumas was barged off by the leading Peugeot while he was trying to overtake it. This resulted in contact with a GT vehicle that had to be lapped and an accident leading to retirement.

“We congratulate Peugeot on their victory and the ILMC title. Nevertheless, there is an aftertaste today which is not so pleasant,” added Ullrich, the Head of Audi Motorsport. 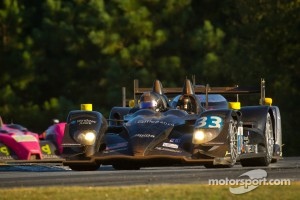 The LMP2 winners saw their team owner, Scott Tucker, take the checkered flag in sixth overall. It was a fantastic victory for the Level 5 Motorsports No. 33 HPD ARX-01g. Christophe Bouchut and Joao Barbosa celebrated with Tucker.

“We're really pleased with the performance of the Honda,” said Tucker. “The competition was really tough today. We knew it'd be a really tough battle going into today. We knew there'd be a lot of competition today and a big battle. We were fortunate because the car is just about 6 weeks old. It went through a 6 hour race and a 10 hour race. We are really pleased with that.”

For the ALMS teams, this was their season finale. At the penultimate round two weeks ago, Dyson Racing and drivers Chris Dyson and Guy Smith earned the LMP1 championship. The GTE title was also won by the BMW Team RLL with drivers Dirk Mueller and Joey Hand. Today closed out the title fight for the American-based series for the LMP Challenge and the GT Challenge classes.

In LMGT, Ferrari teams take the double class win. The AF Corse Ferrari team of Giancarlo Fisichella, Gianmaria Bruni and Pierre Kaffer drove their F458 Italia to the GTE-Pro victory. As one of the ILMC teams, they have to wait until next month for the final race in China to determine their fate.

“Last few laps especially, during the restart and the last few laps. I was very nervous, The BMW and Porsche had a bit of an advantage. They were 30 seconds behind me but with the safety car they were only a few seconds back,” said Fisichella. “I knew I had to fight right to the end. I have to thank the team for the strategy and the mechanics. And thanks to Pierre, someone I’ve shared a car with this year, and Gianmaria who was able to keep the BMW behind him with the used tires. We are looking forward to Zhuhai and looking to win the race. We have a fantastic package so we'll be going for it.”

Not far behind the Ferrari was the ALMS No. 45 Flying Lizard team. BMW Team RLL No. 55 took third

Krohn Racing landed the GTE-Am class victory in their Ferrari F430 and team owner/driver Tracy Krohn said, “I'm gonna let the team walk the trophy up the hill. They did a great job today. We didn't miss a step. The team kept us strong and in line. When you do this great you always remember. Traffic was much worse than you could have imagined. It was unbelievable. With the P cars there is so much down force, and if they slow down too much they lose grip. To share this win with Michele and Nic is great, and Nic has been with me for 8 year, so it's nice to share this hardware with him.” 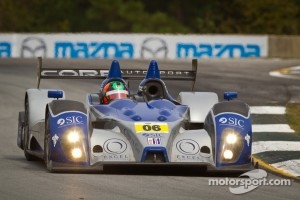 In LMPC, the teams had very close battles both on and off the track as the ALMS championship came down to the wire. When all was said and done, the team title went to CORE autosport and the drivers’ championship was shared by three talented drivers. PR1 took the victory with Ken Dobson, Ryan Lewis and Henri Richard in the No. 52 Oreca FLM09. All the teams use the same chassis and engine which makes for the close racing during the season.

“I think from the beginning the way the race went, we went in just wanting to survive. Be in the lead lap with the last hour. We knew we'd be in a good chance to win the race. We got some good luck today,” said Lewis. “I think PR1 is definitely the highlight of my career and the teams I've worked for. They aren't the biggest or the most well-funded, but they are at the top of their game all the time. I never have to worry about the preparation of the car and anything going wrong. It will always be at the top of its character. “

CORE autosport’s Gunnar Jeannette who is one of the trio of drivers who share the title commented, “We definitely didn't know what was going to happen either, I don't think we still know what's happening (tying for the championship). All that aside, I have to say it’s a fantastic year driving with Ricardo and be a part of the Core Autosport organization. This was part of the Lites series last year. It was a steep learning curve for any organization I've ever been a part of. To see the team progress from Sebring and now being part of the team that is the sole champion in the Team championship.”

Ricardo Gonzalez added, “I am very happy for the team. To participate in the ALMS it requires a lot more people. They did a great job recruiting a lot of talent. We got along very well, which is important. I would like to be champion with Gunnar only, but that’s life. We are very happy for Eric. We had a lot of good fights. He is a really good driver.”

Genoa Racing lost the team title by a mere one point but their driver Eric Lux shares the driver championship and he said, “I'm actually really excited we shared a championship with them, in LMPC and the other challenge class, some might shrug it off, but it's some of the best racing in the series right now. At the end of the day, we're all racers and we want to have intense battles and this was one of those today and this season.”

The GT Challenge class is made up of Porsche 911 GT3 Cup cars and as the teams headed into the ALMS season finale, it was close but Black Swan Racing did what they needed to in order to secure not only the team title but that of their two season long racers. It was a see-saw battle for the race lead between their main rivals from TRG and the Alex Job Racing team and in the final minutes, it was Black Swan’s Jeroen Bleekemolen who took the win. 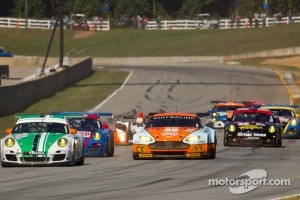 The Dutchman not only nailed down the team title but also gave the team owner and boss, Tim Pappas, his second title. The team’s third driver was Sebastiaan Bleekemolen. “It's so close between the three of us at the end, if anything went wrong we'd lose a lot. We had some issues, one time the starter motor wouldn't work. We lost the dash for a bit. It was great that we could take it. Last year we lost Petit by only a little bit. I did almost 4 hours in the car. I had nice a bit of a gap at the end but we got the safety car and I got nervous. Then I had to push at the end just to make sure to keep him back behind me,” said Jeroen Bleekemolen.

Pappas smiled as he related the final laps of the race and taking his second title. “I've developed a great friendship with the Bleekemolen brothers and it's been a great season and great weekend. The other teams, like Alex Job and TRG kept us honest all weekend. It certainly wasn't easy. It was something we had to work for. We really appreciate this victory and championship. Every 2 seconds I was talking to the team, I was bugging them constantly for the last 4 hours asking, where are we, what are we doing? Are we ok? When the last caution came out, we got deflated because the same thing happened at Laguna. And to lose last year, we got freaked out when it was going to be so close at the restart. The sweetest part of the win this year is that we had competition for the whole season. So for sure, it made the win a big achievement and everyone at Black swan, it feels fantastic.” 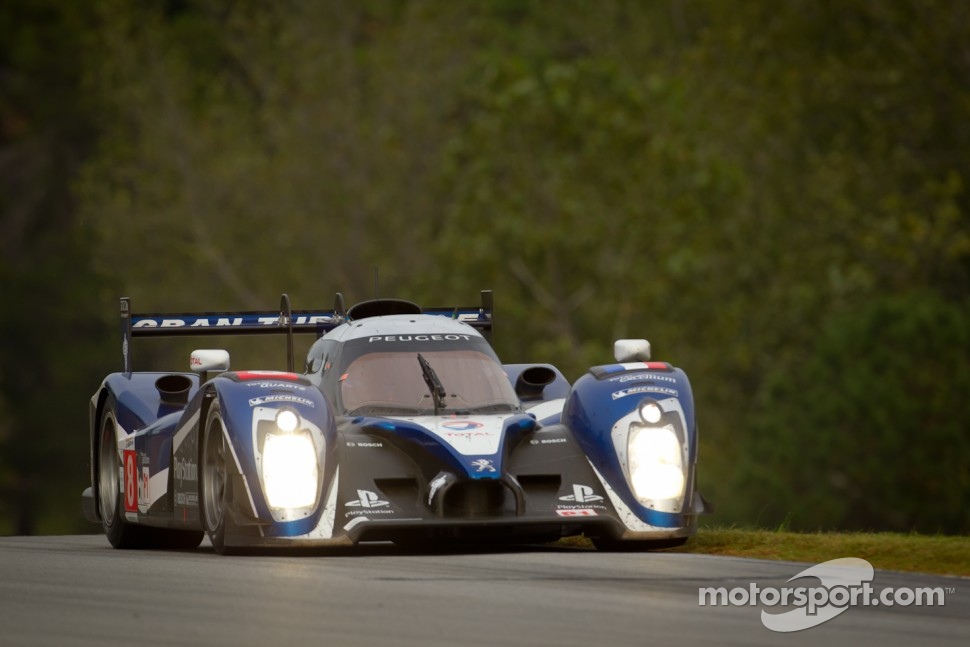