« We might have a last trump card to play ! » Along with Marc Gené, the Marseillais will join Nicolas Lapierre at Petit Le Mans. He therefore rejoins Team ORECA-Matmut, a team he knows very well…

I love this track. I like American tracks in general : outside of Le Mans, which is unique, they are the prettiest!

Nicolas, what’s it like to be teaming up again with Team ORECA-Matmut ? « I’ve always kept in touch with the team, and excellent relationships, whether it be with Hugues de Chaunac, Philippe Leloup (Team Manager), David Floury (Technical Director) or the mechanics. We’ve kept in contact and actually I have the impression that I never left the team, a team that gave me so many nice opportunities. By consequence, I’m thrilled ! »

What’s the goal at Petit Le Mans? « Team ORECA-Matmut showed this year that it’s still possible to win a race with the Peugeot 908 HDi FAP. In top speed, we’ll surely be missing a little something : the long backstretch is important. That said, it’s a short track, with lots of traffic. If we work hard, and play the strategy in our favor, with this car that’s so well balanced, we might have a last trump card to play ! »

And you know the track well too… « I have two poles here, one with Peugeot en 2009. I love this track. I like American tracks in general : outside of Le Mans, which is unique, they are the prettiest ! They haven’t changed much from the old days, and they are atypical. And of course, there’s the fans…It’s an atmosphere you can’t find anywhere else. And actually, the message that ORECA had at Sebring, « I Love US Racing » fits me like a glove ! »

What do you think about your teammates? « I’ve been racing a long time with Marc (Gené). We form a great duo, and I’m looking forward to joining him. Nicolas, I’ve known since he joined ORECA. He’s a good guy, and he’s very fast. He’s got all the necessary qualities to be an endurance driver. At ORECA, you know there’s never any doubt about the drivers ! »

You’re now used to the Peugeot 908 but you are returning to the 908 HDi FAP… « It’s always great to be behind the wheel of a Peugeot ! The old Lion’s not far behind its sister. The chassis is excellent and the engine is good. I’m looking forward to drive it at such an event.

What role has ORECA played in your career? « I have a lot of estime for Hugues and the team in general. He’s always helped french drivers, and also looked out for me. Already in 1993, he’d offered me a ride in a BMW in Supertourisme. In 2000, I competed at Le Mans with ORECA and Chrysler, then in 2002 with Dallara. I learned a lot with this team and I’m happy to be coming back. It’s great ! »

Marc Gené : « Quite simply, one of the best teams »

Le Mans 24 Hours winner in 2009, the Spanish driver will team with Nicolas Lapierre and Nicolas Minassian at Petit Le Mans. This will be his first time with Team ORECA-Matmut… 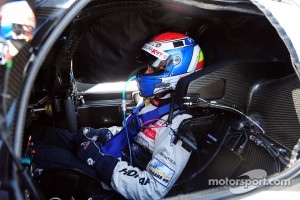 Marc, what do you know about Team ORECA-Matmut ? « I’ve only heard good things about ORECA. I was not expecting to drive for this team, but when Peugeot called me, it was a nice surprise. My brother, Jordi, knows ORECA through his associations with Seat. He has told me about the team. I know they are very professional. I visited their installations some years ago and I was very impressed. Quite simply, it’s one of the best private teams ! »

You will be driving the Peugeot 908 HDi FAP with which you won the 24 Hours of Le Mans. It must be a special feeling… « It will be very special. During winter, I tested the car again during a testing session and I told myself that it would probably be the last time. I have a lot of good memories of this car. I lived the best moment of my career with it. I’m very happy therefore to drive this car one more time, in a race. This was also a nice surprise, especially since Petit Le Mans was not initially on my schedule. »

Speaking of Petit Le Mans, what do you think of the track ? « I like it, even if it is one of the hardest, if not the hardest tracks on which I’ve raced. The layout is complicated to learn. Last year, during my second race there, I was still learning ! But I enjoyed it. The last corner is very impressive and reminds me of a rollercoaster. There are several corners that remind me of rollercoasters. »

Do you like the atmosphere at American events? «Yes, and it’s most notable at longer races like Petit Le Mans and Sebring. Just from the safety car periods, the race is often won at the last second. I like the American philosophy of competition. Petit Le Mans, like Sebring, is not Le Mans, but they are what’s closest ! »

What will be the goal? « Win ! To be honest, it will be harder to win at Petit Le Mans than it was at Sebring. When I take to the track, my objective is to win. I finished second at Petit Le Mans last year so I’m hoping to reach the top step this time. But we’ll have to count on a little something. We have to be ready if the opportunity presents itself. »

You know one of your teammates, Nicolas Minassian, very well. But Nicolas Lapierre much less... « Yes that's true. I'm very happy to be with Nicolas Minassian again, with whom I started at Peugeot Sport. We really collaborate well together. I get along well with my usual teammates but with Nico, it's something special. Concerning Nicolas Lapierre, he's a quick and experienced driver. I'm sure that together, everything will go well! »

Nicolas Lapierre : « Stay in the game… » Two years after discovering Petit Le Mans, Nicolas Lapierre is returning to the track in the heart of Georgia. This time, the defending winner of the 12 Hours of Sebring joins forces with Nicolas Minassian and Marc Gené…

Nicolas, what are you looking forward to in this trip? « I’ve thrilled to be returning to American racing, in an exciting format such as Petit Le Mans. We have positive memories of the United States of course. I’m happy to be racing on such a unique track, demanding for both drivers and machine. I really like this track with its valleys and peaks. »

In terms of pure performance, we know there will be a small deficit.

After success at Sebring, what level is the ambition set ? « It’s hard to say, considering it’s such a hard event, with its deep field and length of race. In terms of pure performance, we know there will be a small deficit. However, we hope to remain close, to stay in the game. The race is long, less than Le Mans, but the pace is maybe even quicker, more « aggressive. » We will look to our success at Sebring for sure : stay in the same lap as the leader for as long as possible and take advantage of mistakes. There are always mistakes at Road Atlanta. »

You are familiar with your new teammates? « We’ve gotten in the habit of talking since Team ORECA-Matmut has been running the Peugeot 908 HDi FAP. They are two drivers who know perfectly well the car, and the track : this was what Hugues (de Chaunac) wanted. They are two top endurance drivers and it’s important to arrive at Petit Le Mans with their experience. They are also two great guys who are open and cool. »

The No. 10 Peugeot 908 HDi FAP will be carrying a message « Thank You Fans ». What kind of impression did they make on you at Sebring ? « Their welcome was excellent ! ORECA has a special history in the United States and I think it’s even more so now that we’ve won the 12 Hours of Sebring. Our team is very close to the fans and that’s something I appreciate. I like this closeness to the public. Sportscar fans are generally very passionate and knowledgeable, especially the American fans. They are specialists. »

Two years after your first Petit Le Mans, what are you bringing from that experience to this year’s participation ? « It taught us a lot. Working in these special conditions, compared to Europe is always enriching. It makes the team evolve : in pitstops, strategy… The approach is different. We see new things, and we’re learning. It’s an adventure. »