Townsend Bell: "We had a good car and it would have been nice to see what might have unfolded."

Bell (San Luis Obispo, Calif.) had the wheel of the No. 23 Team West/AJR Ferrari on a wet track with rain Yokohama tires mounted on the 458. 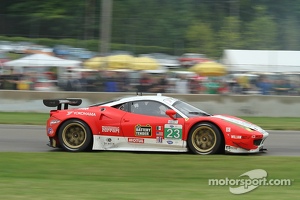 Forced to start from the back of the grid as the previous day's qualifying time was disallowed, Bell had ground to make up.

As the track began to dry and strategy began to unfold, Bell called in with a loud header noise on lap 14.

He pitted the red and white Ferrari only to have the crew take it behind the wall for repairs, which eventually ended the day without Keen (Charleston, SC) ever getting behind the wheel.

"It was a tough day," Bell said. "I was making my way back up through the field after starting last on the grid. I had made it up to fifth in GT when the engine note changed and the power decreased. I brought it to the pits, the guys took it to the trailer and it, unfortunately, ended our day. We had a good car and it would have been nice to see what might have unfolded."

Alex Job, team co-owner, is ready to move to the next event as well... "When Townsend called in with the header it was disappointing," Job said. "We were able to get the car fixed, but by the time we did we were beyond the 70% mark of the race and it did not make sense to come back out and just run needless laps. We go away knowing that we have a good car and I still have a smile on my face about Leh's qualifying run."

The American Le Mans Series will travel to Maryland for the Grand Prix of Baltimore to run Aug. 30-31.