A win was surely very close, we will push hard as a team for victory at the next round in Lime Rock Park.

It was Kyle Marcelli, the young and talented Canuk that was appointed to qualify the #89 Intersport Racing LMPC. With a limited qualifying session due to an early incident, the drivers needed to begin pushing right away to get in a quick lap. For most, including Marcelli each lap was quicker than the previous. As the checkered flag was waved Intersport Racing's Kyle Marcelli put in a great effort placing the

"I was quite happy with our qualifying performance as we only needed a fraction more for the pole position. I really enjoy the atmosphere around any qualifying session as its about putting everything you and the car have into just one quick lap. On a temporary street circuit its about using every inch of the road, literally and its a lot of fun." Said Driver Kyle Marcelli 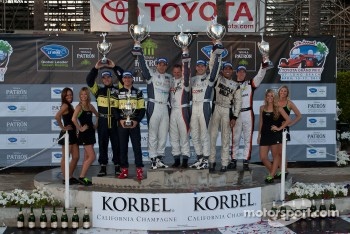 Co-driver of the #89 and California native Tomy Drissi did the opening stint of the 2-hour street race. Starting on row two, it was clear track ahead. Drissi did a great job keeping the car up front and in contention before handing it off to Marcelli at the halfway point.

As the team pitted, the strategy opted for a quick stop just doing the driver change and adding fuel. It paid off as Marcelli exited the pits with the race lead. However, about 10 laps later Marcelli was passed by the #06 of Gunnar Jeannette. Marcelli was pushing hard and battling through GT traffic getting the most out of his LMPC but was unable to re-take the lead. The #06 of Gunnar Jeannette was the lone car to take both fuel and tires in the pit stop, which seem to have given him the slight advantage over Marcelli. With a late full course caution, the checked flag was displayed. Marcelli and the Intersport Racing crew celebrated a well-deserved 2nd place finish.

"I was pleased to again be celebrating back on the podium of the American Le Mans Series. The Intersport Racing team did a wonderful job with preparation as we were quick right from the start and just having to make small changes to improve. A win was surely very close, we will push hard as a team for victory at the next round in Lime Rock Park." Said Kyle Marcelli.