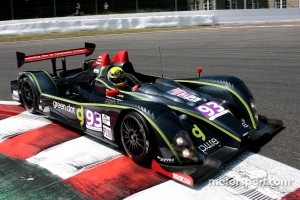 Created in 2009 by the Automobile Club de l’Ouest with the aim to set in place a true ladder series in endurance sportscar racing, Formula Le Mans has established itself as a category in its own right in the Le Mans series. In order to make the class even more attractive, a new “Trophy” will be launched in 2012. As for the prototype itself, available at an unbeatable price, will be fitted with a regulation shark fin and will be eligible to participate in the Le Mans Test Day.

A bridge to the highest level in endurance sportscar racing…

“The ACO wanted to create a true ladder series for endurance, like that which exists in open wheel racing. That is a reality today: Karting, Proto-School ACO, Formula Le Mans, LMP2 and LMP1,” explains Pierre Fillon, vice president of the ACO. The facts confirm it: drivers and teams who started in Formula Le Mans have moved on to compete in LMP1 or LMP2. A perfect example is Mathias Bèche, runner-up champion in 2009, won the 1000km of Spa in LMP2, and signed two pole positions. Fabien Rosier, ex-recipient of the Volant ACO and Formula Le Mans graduate, was awarded the Jean Rondeau prize at the latest edition of the 24 Hours of Le Mans, in which he competed in the LMP2 class. Andrea Barlesi, 2010 champion, is competing in the entire ILMC season, while Dominik Kraihamer authored the fastest race lap in LMP2 during this year’s 24 Hours of Le Mans and scored a podium finish in Le Mans Series with Boutsen Energy Racing. The Belgian team is also a graduate of Formula Le Mans.

In order to develop this ‘ladder,’ the ACO and ORECA present a new “Trophy” which will reward the championship winning drivers and teams at the end of the 2012 season – composed of five to six race of 6 hours in duration. “Formula Le Mans is now an integral part of the step ladder,” underlines Hugues de Chaunac. “It’s both an excellent school and incredible reveler of talent. That said, we want to make it even more attractive and help drivers and teams to take the next step. This is why many new initiatives are being presented.” The winning team will receive an invitation to the LMP2 class for the 2013 Le Mans 24 Hours. The winning drivers will be honoured a 45,000 € prize (to be shared amongst the drivers) to aide in an LMP1 or LMP2 drive in the 24 Hours of Le Mans. In addition, the first three finishers from each race will receive prizes in the form of spare parts or Michelin tyres.

The 24 Hours of Le Mans Test Day on tap…

As in 2011, the Formula Le Mans competitors will have the chance to run on the 24 Hours of Le Mans track during the Test Day. “It’s a unique opportunity for each to discover the legendary layout and to acquire the experience needed for the future. First-time drivers can also complete their mandatory laps ahead of an eventual participation in the 24 Hours. It’s unique: nothing replaces on-track experience at Le Mans. Formula Le Mans is the best bet when it comes to quality/price/opportunity.”

The Formula Le Mans prototype is capable of racing in the most difficult events in the endurance world, such as the 12 Hours of Sebring or Petit Le Mans. Starting in 2012, the Formula Le Mans will be fitted with the shark fin. Despite this aerodynamic evolution, the cost of purchasing and running the car will remain capped at an unequaled price for a “Le Mans” prototype: 260,000€, motor included! To offer the most transparency possible, the ORECA-FLM 09 is homologated for the next three seasons: 2012, 2013, 2014.

In order to streamline the “ladder series for endurance” and ease comprehension of different classes, the European championship will be name LMPC starting in 2012. Hugues de Chaunac explains the reasoning: “Before, there were LMP1 and LMP2. Now the LMPC, Le Mans Prototype Challenge will be running alongside. It makes sense and solidifies the class both in Europe and in America, where the name has been used for several years.”

The LMPC class, which will run alongside LMP2 in Le Mans Series in 2012, is experiencing much success across the pond. “The 2011 championship is fantastic,” confides Hugues de Chaunac. “The races are hotly contested and exciting to watch. We are in constant contact with the American Le Mans Series and IMSA, whose hard work should be recognised. IMSA has also shown the desire to create a ladder series and an announcement will be made before the season’s end. The goal, regardless of the continent is to keep moving forward.”

Additionally, ORECA will offer a new web platform for fans and teams in the coming weeks……