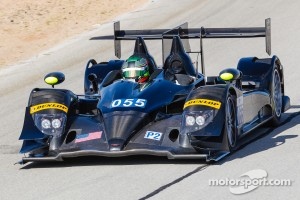 Level 5 Motorsports got its American Le Mans Series presented by Tequila Patrón title defense off to a flying start at Sebring International Raceway this week, as the team’s Honda Performance Development prototypes were quickest in official testing for next month’s 60th Mobil 1 Twelve Hours of Sebring Fueled by Fresh from Florida.

Making the worldwide debut of the new HPD ARX-03b, the Scott Tucker-owned organization showed impressive pace from the No. 055 car, which posted the quickest overall time on Wednesday and ended the two-day test on top in LMP2. Level 5’s No. 95 HPD, running to 2011 specification, also proved its strength by recording the second best time in class.

Tucker, a five-time national driving champion and native of Leawood, Kan., along with season-long co-drivers Christophe Bouchut and Luis Diaz collectively completed a total of 364 laps, more than 1,300 miles in their HPD prototypes, which also ran for the first time on Dunlop tires.

“We’ve been real fortunate as the test went as planned,” said Tucker. “The new HPD ARX-03b performed just as we thought it would. Having driven both cars during the two days, I found it to be a big improvement over the old car. Ending the day 1-2 was very pleasing and gives us plenty of momentum heading into additional test sessions and the race itself next month.”

While Diaz turned a best time of 1:51.714 in the year-old No. 95 HPD, Bouchut’s 1:51.522 lap in the No. 055 car stood as the quickest of the week. Additionally, both cars were more than two seconds faster than last year's LMP2 pole time, showing considerable gains with the Level 5’s new, but already well-proven HPD package.

“We are all very happy with the new HPD ARX-03b,” Bouchut said. “The car is working very well. It was also the first time we ran with Dunlop tires, so there was a lot to cover during the two days, but the result is impressive. Each session we were improving, while also doing tire testing and working hard on the setup. It went exactly to plan.”

Rebounding from a morning oil leak and spin, the No. 95 car returned to the 3.7-mile, 17-turn circuit in the hands of Diaz, who along with Tucker, drove both HPDs over the course of the test. With new Dunlop tires and aerodynamic developments to the HPDs, there was plenty to take away in preparation for the ten-round ALMS season, which kicks off next month.

“We completed a lot of laps over the two days and I had the chance to drive both cars,” Diaz said. “We were very pleased with what we learned but realize that we still have a long way to go before the race. But it’s a very good start for Level 5 and I’m looking forward to the season."

With increased competition on the horizon, Level 5 has clearly stepped up its game after an already successful 2011 season, which included five victories and the ALMS LMP2 championship. This year, the team will be seeking an unprecedented third consecutive ALMS title while also returning to the 24 Hours of Le Mans, site of their debut podium finish in the French endurance classic.

“I think it was a really great two days of testing here at Sebring,” team manager David Stone said. “We learned a lot with the new HPD ARX-03b chassis as well as running the Dunlop tires for the first time. The drivers that drove both cars could definitely see a positive difference in the new car, and everyone at Dunlop has been great to work with.

“This time last year we were a lot further behind the gun, having not even been at this test and still building cars. We’re definitely ahead of that point and will have our second new chassis coming in a few more days to get ready for our next test at the end of the month. We still have a lot to do between now and then, and of course before the race. But we’re prepared for it and look forward to coming back to Sebring to defend our title."

Scott Tucker is the owner-driver of the Level 5 Motorsports team. He is a five time national driving champion and is the current American Le Mans Series (ALMS) P2 class champion. Tucker has over 70 career victories to his name.