Luhr and teammate Klaus Graf are the defending race-winners at Mid-Ohio Sports Car Course, but Friday marked Muscle Milk’s first pole position at the circuit. Luhr and the No. 6 Muscle Milk entry were 0.696 seconds up on Dyson Racing’s Chris Dyson and the No. 16 Lola-Mazda coupe.

Luhr’s gap to Dyson may appear to give the illusion that qualifying was a walk in the park. Not so, Luhr said.

“Strangely enough we struggled to get up to temperature in the tire, even though it is so hot,” he explained. Track temperatures got as high as 120F. “We saw it throughout the practice, and qualifying was not so easy. It seems like we cannot get the front tires to work as quickly as we need to. Therefore you struggle a little bit. After that, is was OK, I had quite a good lap.”

Graf and Luhr enter Mid-Ohio riding a five-race win streak and lead the ALMS’ P1 driver’s championship. Qualifying between the Muscle Milk and Dyson camps have been close in previous three rounds with Graf, Luhr and Dyson’s Guy Smith each taking honors. Raceday – at least for the last five events – has been a different story.

“We just have to push ourselves as much as we can,” Luhr said. “In racing things happen so quickly that you can't think, ‘Oh there isn't as much competition right now’ because you can wake up tomorrow and all of a sudden you aren't winning anymore.” 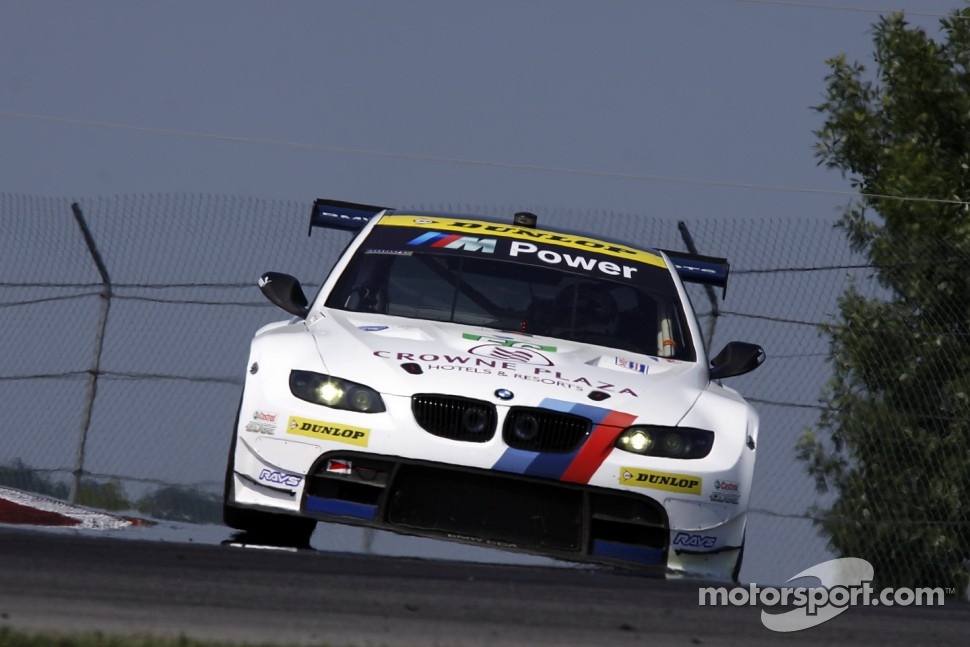 BMW Team RLL’s Jörg Müller captured his first ALMS pole position with a GT record lap of 1:19.298 (102.510 mph). The GT session may have been the most entertaining – certainly it was the deepest – with cars from Corvette Racing, ESM Racing, BMW Team RLL and Flying Lizard Motorsports running within two seconds from each other on the track for the bulk of the 15 minutes.

While two of the Corvettes and two of ESM’s Ferraris swapped the provisional time, Müller and his No. 55 BMW M3 GT seemingly came out of nowhere to post his fastest lap. He ended the session only 0.031 seconds clear of ESM’s Guy Cosmo in the No. 02 Ferrari F458 Italia.

“It is always important to be on pole, especially during the first stint (of the race),” Müller said. “But if you look in the last few races we started fourth but finished eighth, and first and finished fourth. It is more important to keep the tire over the whole stint and not just worry where you start. The temperatures are really high making the circuit really challenging. You have to find the right setup to do the right lap time. So when you talk to the engineer telling him all of the problems in each corner, he'll go mad. So you focus on just big corners where you can get faster.”

Müller’s pole position was the second in a row at Mid-Ohio for BMW Team RLL, based in nearby Hilliard. Joey Hand was the fastest qualifier in 2011. Müller said there is extra incentive from team principal Bobby Rahal for performing well at the team’s home track.

“Bobby is always doing steaks, and if we do a good job we get bigger steaks,” he said coyly. “But this is important for us. We are very close to the home for RLR. You give everything pretty much every season and every race. It just came out very nice for the Rahal team. I expect the same closeness in the racing tomorrow, like we saw in qualifying today.”

The latest round in P2 went to Level 5 Motorsports and Christophe Bouchut. The Frenchman turned a lap of 1:13.230 (111.004 mph) in his No. 055 HPD ARX-03b for his second pole position in three seasons at Mid-Ohio. Bouchut and Tucker hope that bodes well for Saturday; they went on to win the 2010 race in Prototype Challenge.

“Pole position is always good but it doesn’t always help for the race,” said Bouchut, who shares the P2 driver’s championship lead with Tucker. “The hot weather didn't really change anything although we had to adapt our tires. It is more important to get through the traffic and save the tires.”

That will help Level 5 get back in the winner’s circle, a place Level 5 missed for the first time two weeks ago at Canadian Tire Motorsport Park. Martin Plowman outdueled Bouchut for Conquest Endurance’s first ALMS victory and snapped Level 5’s unbeaten streak on the season. Plowman qualified second in class at 1:13.734 (110.245 mph) driving the No. 37 Morgan-Judd. Dane Cameron was third in class for Dempsey Racing and its No. 27 Lola-Judd.

“(CTMP) was a really good race and I think tomorrow it will be good for sure,” Bouchut said. “We have other competitors who are competitive and have a car and lineup that are strong. We'll put (the last race) behind us and just focus on winning the race tomorrow.” 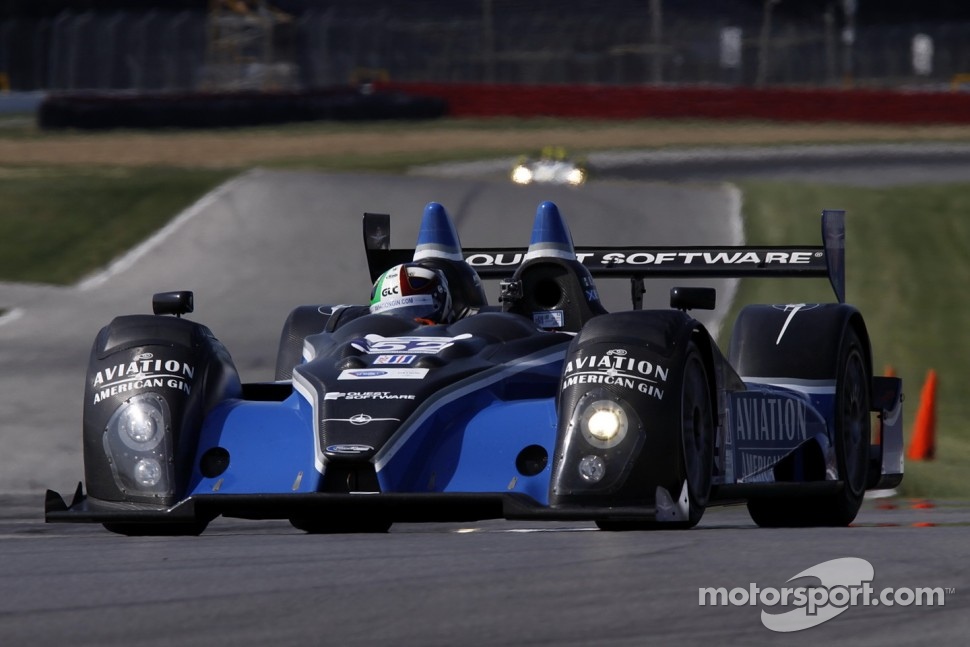 Marino Franchitti set a Prototype Challenge qualifying record in a thrilling bout with Bruno Junqueira. Franchitti set a time of 1:15.107 (108.230 mph) in PR1/Mathiasen Motorsports’ No. 52 ORECA FLM09 to take pole position by 0.082 seconds over Junqueira in RSR Racing’s No. 9 entry.

The two drivers exchanged fastest laps four times over the final three minutes of the session. Junqueira had hoped to continue building on his and RSR’s first ALMS victory two weeks ago.

Instead, Friday was a remarkable comeback for the PR1 crew. It debuted a new car two weeks ago in Canada but it only lasted 26 laps before a three-car crash knocked it out of the race and before Franchitti recorded a stint. The team pressed its previous car into service for this weekend.

“I'm delighted for the whole P1 team,” said Franchitti, who drove a PC car for the first time at CTMP. “We put some delightful laps in the car this weekend. I was happy to get close times to Junqueira. I'm still building on the PC car at the moment. I love it right now cause I'm on the pole, but I haven't done a full stint on tires and been through a full race. Hopefully we get a nice result tomorrow and I can tell you more about how great this car is.” 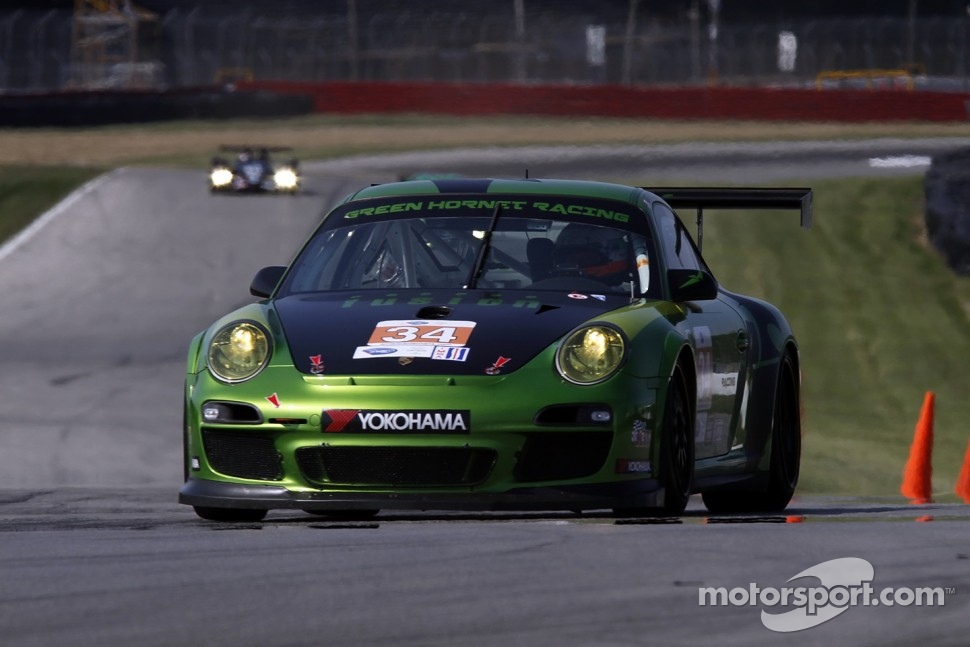 GT Challenge started off qualifying with a battle that saw all five cars swap provisional pole position. Green Hornet Racing’s Damien Faulker won his third class pole in four races with a lap of 1:25.130 (95.487 mph) in the No. 34 Porsche 911 GT3 Cup.

“It all starts with the practice sessions and working hard with the engineer making the car better,” Faulkner said. “I was last here in 2001 (he was third in Indy Lights), so it had been a while. I forgot how challenging it is and especially with all the surface changes how technical it is. It's hard to have a perfect car, so you make it the best you can.”

Faulkner’s pole marked a reversal of fortune for Green Hornet from two weeks ago at Canadian Tire Motorsport Park. The car went out of the race early in the same three-car collision that knocked out the PR1 prototype after Faulkner claimed pole position there as well. The Green Hornet crew more or less rebuilt the Porsche and apparently did it extremely well.

“The Green Hornet team is the hardest working team on the pit lane, if not the planet,” Faulkner said. “It's practically a new car so we came out strong. It was perfect off the truck but we have to dial it in each day and against the track conditions. So you have to be clever where you want the car to be good.”