MacNeil and Bleekemolen finish 2nd in GTC at Road America

Since qualifying yesterday the team installed a new motor, made a complete set-up change and fixed a leaking shock on the Porsche. MacNeil (Hinsdale, ILL) had the controls of the No. 22 WeatherTech 997 in the early wet conditions of the race starting on rain tires and going to slick tires on lap 16. The 20-year old MacNeil had a strong stint bringing the black and white Porsche from eighth to second place when he handed the controls over to Bleekemolen (Monte Carlo). The Dutchman set out to try and keep his Road America winning streak alive. He was able to set fast lap of the race, but didn't quite have the tires to run down the winner when a late race caution ended his charge. The team had to settle for the second step on the GTC podium. 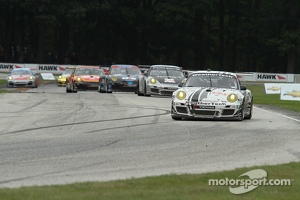 "The start was interesting," MacNeil said. "It was pretty wet and slick in a lot of the corners, especially down through the Kink area. The WeatherTech Porsche was handling really good. I was able to drive up from eighth to second place. Jeroen did a great job pressing for the lead, but the late race caution ended his charge. The car had good balance and horsepower for the race. I am looking forward to Baltimore."

Bleekemolen was able to set fast lap of the race for the crew.

"It was a very exciting race," Bleekemolen said. "I was able to have a good battle all race with four cars right up until the end. I had the oldest tires of the group, but was still able to hang on for second. Three or four cars could have won the race. The Lizard car was fast, but I was able to put in the fastest lap and we were right there to the end. It was a good day. The team bounced back from a tough week of practice and qualifying to get the car right for the race, so good work by the Alex Job guys today."

Alex Job, team owner, had his crew come through for the race. "It was quite a couple days with qualifying and practice problems." Job said. "We had a couple of issues in practice that we finally worked through prior to the race. We put a whole new set-up on the car, had a leaking shock and changed the motor. The crew worked overtime to get it right. Cooper and Jeroen did a great job coping with the changing track conditions to deliver a hard fought second place finish today." The American Le Mans Series will travel to Maryland for the Grand Prix of Baltimore to run Aug. 30-31.

A pair of podium finishes for Corvette Racing at Road America