MacNeil and Bleekemolen on Pole at Mosport

Jeroen Bleekemolen and Cooper MacNeil have had the WeatherTech.ca Porsche at the very top of the time sheet for three of the four sessions this weekend.

BOWMANVILLE, Canada - Cooper MacNeil and Jeroen Bleekemolen will start their No. 22 WeatherTech.ca Porsche from the pole position in GTC for tomorrow's running of the American Le Mans Series Canadian Tire Motorsport Park Grand Prix of Mosport. 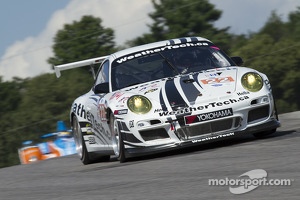 Bleekemolen (Monte Carlo) put the resurrected Porsche, rebuilt since Lime Rock, on the GTC pole position with a time of 1:21.310. Bleekemolen and MacNeil (Hinsdale, Ill) have had the WeatherTech.ca Porsche at the very top of the time sheet for three of the four sessions this weekend.

"It was a really good qualifying run," Bleekemolen said. "It is a new car since Lime Rock. The guys did a great job since the last race to completely rebuild the car and it has been fast all week. The car has been trouble free and fast. We have been the fastest in the practice sessions and now on pole. Cooper is doing some fast laps, so I think we are the favorite for tomorrow. I think it is going to be a great race to the very end."

MacNeil also has a lot of confidence in the rebuilt WeatherTech.ca Porsche around the 2.4-mile, 10-turn Canadian Tire Motorsport Park circuit.

"The new WeatherTech.ca car was fast right off of the truck," MacNeil said. "The guys rebuilt the car in less than eight days. It usually takes a least three times that long. We were the fastest in each of the practices sessions and Jeroen put the car on pole by running a superfast time.

I was able to get faster each lap. I was finding time out there and I am ready to start on the pole tomorrow. Again the crew did a great job to give us a car that is very fast here at Mosport. Now we have to put everything together for the race tomorrow and reward them with a win."

Alex Job, team owner, is rewarded with a pole run for all of the hard work this past week.

"Amazing," Job said. "We left Lime Rock with a big task of rebuilding the car. The guys did a great job and Jeroen put in an amazing qualifying lap to confirm the hard work with a pole position. Cooper has run some fast and consistent laps. We are looking forward to a good day tomorrow."

The American Le Mans Series will travel to Canadian Tire Motorsport Park for the Grand Prix of Mosport, July 19-21. The race will be broadcast on July 21 stating at 1:00 pm EDT on ESPN 2. Live streaming will start July 21, at 11:45 am EDT on ESPN 3.

The ALMS GTC category is specific to one of the most popular factory produced racing cars in the world, the Porsche 911 GT3 Cup. Developed for Porsche's one-make series around the world, the new version of the Porsche 911 GT3 Cup is based on the road-going 911 GT3 RS. The power unit featured in the new 911 GT3 Cup is largely identical to the production engine of the 911 GT3 RS with the same output of 450 bhp and the same maximum engine speed of 8,500 rpm.