After putting another top-5 in the books and qualifying for the pole at Petit Le Mans, Merchant Services Racing team's third place in the American Le Mans Series presented by Tequila Patrón PC Championship was the icing on the cake for the teams successful first year. Among some of the toughest sports car racing competition in the world, Merchant Services Racing, owned and operated by BAR1 Motorsports, has quickly solidified their position in the series earning the respect of their competitors, series officials and fans alike. 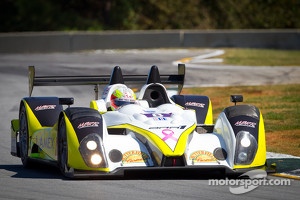 Downs took opening stint in the driver's seat showing a good competitive pace running within the top five. Later, a spin off track dropped the car a lap down.

Kyle Marcelli took the second sting and proceeded to do what Kyle Marcelli does. Setting the fastest lap of the race with a 1:15.859, the fastest LMPC on track, he was unable to get the car back on the lead lap. Marcelli continued to pour the on pressure performing a double driving stint.

Chapman Ducote climb aboard for the fourth session. Though showing excellent speed and pace, Ducote came into turn seven only to find a GT car losing control. In an effort to avoid contact, Ducote was forced off track. Chapman was forced to make a pit stop to check over the car resulting in the loss of another lap to the leaders.

Marcelli jumped in for the final and nighttime session of the race. After 10 hours of competition, in an event where merely finishing is a victory, the MSR crew were thrilled to celebrate the top-5 finish.

"The final race of the season is one of the toughest," noted team owner, Brian Alder. "The key to doing well in a 10 hour race is to being consistent and keeping the car on the track. The car never missed a beat all day. We ran without mechanical issues and the crew did a great job. Our pit stops were flawless."

"I'd be remiss not to mention Kyle Marcelli's run in qualifying," said Alder. "He did an outstanding job qualifying and putting the #8 MSR Lamex / Butterfield Farms car on pole. Honestly, we were shocked when we saw the time on the timing and scoring screen. It was truly an amazing lap."

The enormity of the record 1:14.099 qualifying time was not lost on Marcelli either.

“It was another intense qualifying session. Said Marcelli. I love this race track, it’s so fast and really requires a nice rhythm from turn one to turn five. It’s rewarding when you can put a complete lap together.”

"While we were pleased with our top 5 result in the race," added Alder, "finishing 3rd in the championship is a great accomplishment. We worked hard all year and improved each and every race. I really have to credit our crew and have to give extra credit to my crew chief, Colin Adams, for building a solid car all year. It's only our first year competing in the ALMS, but finishing third in championship proves and establishes us as a strong consistent and competitive team."

"We are looking forward to returning in 2013," said Alder in closing. "Count on us to be a serious contender in the fight for the PC championship.”

Merchant Services Racing's next event is the season-opening Mobil 1 Twelve Hours of Sebring at Sebring International Raceway on Saturday, March 16, 2013.

Falken Motorsports, Henzler and Sellers staying with Porsche in 2013