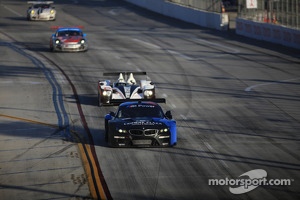 Finishing second was the pole winning Rebellion Racing Toyota of Neel Jani and Nick Heidfeld, who led the first half of the two-hour race before losing out on pit strategy at the midway point.

Running a single set of Michelin street soft tires for qualifying and the entire race, Luhr pitted the Muscle Milk HPD Honda after an early caution period and handed over to Graf who topped off on fuel and returned to the fight.

When Jani pitted from the lead near the halfway point for fuel and a hand-off to Heidfeld, Muscle Milk’s Graf followed him into the pit lane, remained in the car and quickly took on the half of tank of fuel needed to take the lead and run to the finish.

The Rebellion Toyota ran qualifying and the entire race on the same set of Michelin ultra wide tires, proving both combination were more than equal to the challenges of America’s premier street race.

“The team made a perfect race strategy and the Michelin street softs were great once again,” said Graf. Michelin Sweeps Top Six in GT with BMW 1-2

What was expected to be a “development” season for BMW Team RLL, showed the new BMW Z4 GTE is running well ahead of schedule as Bill Auberlen and Maxime Martin led a Michelin sweep of the top six places and a BMW 1-2 finish ahead of teammates Dirk Muller and Joey Hand.

The BMW team switched to Michelin for the 2013 ALMS season. All eight Michelin GT entries raced with the Michelin “tall” front tires launched with great success in 2012.

Finishing third after winning the pole and leading much of the GT race was the SRT Viper of Dominik Farnbacher and Marc Goossens, followed by the defending ALMS and Long Beach champions Oliver Gavin and Tommy Milner. Corvette’s Jan Magnussen and Antonio Garcia finished fifth, followed by the Paul Miller Racing Porsche of Bryce Miller and Marco Holzer.


“We were pleased to see that both our Michelin street soft and ultra wide tire combinations were able to deliver excellent performance and extended tire life,” said Ken Payne, motorsports technical director, Michelin North America. “The GT pace was also quite strong and seeing all of our technical partner teams run well at Long Beach is encouraging as we head to Monterey for our next race (May 11).”