© 2021 Motorsport Network. All rights reserved.
TV Tickets Fashion Giorgio Piola Jobs
Previous / The Viper GTS-R is back at Road Atlanta in 2012 Next / Does the DeltaWing lack an on track presence? - Video
ALMS Testing report

BRASELTON, Ga. (Oct. 17, 2012) – Muscle Milk Pickett Racing was on the offensive at Road Atlanta on Wednesday as it set the fastest time in testing ahead of the 15th Annual Petit Le Mans powered by Mazda. Saturday’s 1,000-mile/10-hour race will decide the American Le Mans Series presented by Tequila Patrón’s P1 championship between Muscle Milk and Dyson Racing. 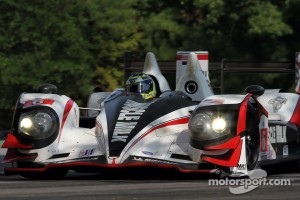 In GT, though Corvette Racing has already clinched the driver, team and manufacturer championships, it showed no signs of laying low after it posted the quickest GT time in testing.

Muscle Milk’s No. 6 HPD ARX-03a with drivers Lucas Luhr, Klaus Graf and Romain Dumas behind the wheel topped the test session chart with a lap of 1:10.680 (129.372 mph), 0.296 seconds ahead of Rebellion Racing’s No. 12 Lola B12/60-Toyota. Rebellion and its drivers, Andrea Belicchi, Neel Jani and Nicolas Prost are competing with a contingent of European Le Mans Series teams entered in the race.

Corvette Racing showed it’s out to win Petit Le Mans, even after clinching the GT titles at VIRginia International Raceway in September. The team’s No. 4 Corvette C6 ZR1 driven by Oliver Gavin, Tommy Milner and Richard Westbrook laid down the fastest GT lap of the day, a 1:19.991 (114.313 mph). 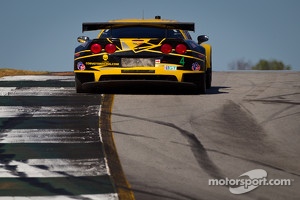 Flying Lizard Motorsports was nipping on Corvette’s heels, only 0.15 seconds back. The No. 45 Porsche 911 GT3 RSR, with drivers Patrick Long, Jörg Bergmeister and Patrick Pilet turned a 1:20.144 (114.095 mph). The Lizards were followed by a pair of Extreme Speed Motorsports Ferrari F458 Italias led by Scott Sharp, Johannes van Overbeek and Toni Vilander; their No. 01 ESM Ferrari completed the top three in GT with a lap of 1:20.158 (114.075 mph).

Level 5 is in a head-to-head battle with Conquest Endurance for the ALMS’ P2 championship. Driver/owner Scott Tucker has pulled out all the stops to ensure victory, bringing in four-time IndyCar champion Dario Franchitti plus his younger brother, sports car hot shoe Marino, to co-drive. The 1:13.414 (124.554 mph) put in by Level 5 was 0.740 seconds quicker than Conquest Endurance’s No. 37 Morgan-Nissan with drivers David Heinemeier-Hansson and Martin Plowman.

Though running unclassified, the Nissan DeltaWing’s quickest lap of 1:13.686 (124.094 mph) placed it between the top two P2 times. The team experienced shades of the 24 Hours of Le Mans shortly before the close of the combined test session when the experimental car made contact with Green Hornet Racing’s No. 34 GTC Porsche. The contact sent the No. 0 DeltaWing off track and on its side with Gunnar Jeannette behind the wheel. The damage appeared significant, but the team expects to have the car back on track tomorrow. 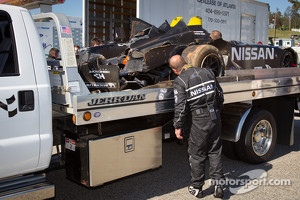 “Not the best of practice sessions, unfortunately,” Jeannette said. “Everything was going well. (Co-driver) Lucas (Ordoñez) had a good run. All of the changes we have been making have been positive. I followed a GTC car through [turns] 10a and 10b, and in following the car I fully expected that he saw me. I had a run on him exiting 10b before the bridge and pulled almost completely past. He cut over to take the apex and made heavy contact with the left-rear of our car that sent me for a bit of a ride. Luckily, the guys built a very strong car. While the damage looks to be bad in photographs, the car took the impact quite well. We have all the spare parts to fix it and we have an excellent crew that are already going to work and almost have all the damaged parts off it already.”

CORE autosport hit the ground running at Road Atlanta with the fastest Prototype Challenge time of the day. With a 1:14.908 (122.070 mph), the No. 05 ORECA FLM09 of Jon Bennett, Colin Braun and Ricardo Gonzalez was 0.65 seconds clear of its nearest competition ? the No. 8 Merchant Services Racing ORECA FLM09 driven by Kyle Marcelli, Matt Downs and Chapman Ducote. CORE clinched the PC team championship at Road America and the driver championship for Alex Popow at VIR. Dempsey Racing’s No. 25 ORECA FLM09 with Henri Richard, Duncan Ende and Ryan Lewis was third in class at 1:16.097 (120.162 mph).

Another team with its name already engraved on the championship trophy was tops in GTC: Alex Job Racing. Drivers Cooper MacNeil, Leh Keen and Dion von Moltke hustled the No. 22 Porsche 911 GT3 Cup to a quick lap of 1:25.220 (107.299 mph). The AJR entry was 0.198 seconds clear of TRG’s No. 66 Porsche 911 GT3 Cup driven by Spencer Pumpelly, Emilio Di Guida and Nelson Canache. Green Hornet Racing was third in the order. The No. 34 Porsche 911 GT3 Cup and pilots Peter LeSaffre, Damien Faulkner and Brian Wong turned a 1:25.612 (106.807 mph). LeSaffre was in the Porsche when it made contact with the DeltaWing.

“I had no place to go,” LeSaffre said. “I was tracking out on the curb. My steering wheel was straight, and he whacked me. There is quite a bit of traffic and a lot of turns where you should not pass even if you’re in a P1 car. It comes down to being patient. The race, especially in our class with eight cars, is going to be a tough one.”

Martin Plowman, Conquest Endurance No. 37 Morgan-Nissan (P2) “It’s a fantastic track. I’ve driven it a few times in iRacing. Two-dimensionally I knew what to expect from the layout. But it’s when you get here and you see how steep some of the hills are and how blind the corners are that you get a taste of what it’s really like. Turn 1 is trickier than on the game. The esses are tough as well. If you miss the first apex then you’ll miss them all. You have to be tidy and get all your approaches right. There isn’t a lot of room for error. If you get a wheel off or go wide anywhere then you’ll be in real trouble.”

Dario Franchitti, Level 5 Motorsports No. 055 HPD ARX-03b (P2) “I’m still figuring out where I can and can’t pass the GT cars. I’m relying on Marino’s (Franchitti) experience for that. The chassis itself feels similar (to the Acura P1 and P2 cars). The engine is obviously different. I’d love to have the old engine back! It was a nice little motor but we’re making the best of what we have available. The Level 5 guys have done a great job developing this package. I’ve tried to do this race twice with the Highcroft boys and didn’t get in one year then drove 10 to 20 laps in the wet and mostly under yellow the next year. I’d really like the opportunity to get a lot of race laps this year.”

Cooper MacNeil, Alex Job Racing No. 23 Porsche 911 GT3 Cup (GTC) “The championship is all wrapped up. Points aren’t the objective any more. It’s all about the win. That’s why we’re here and that’s what we do every time out. It’s our focal point. We want to keep Leh (Keen) second in the championship. That’s in our mind as well. There is still a lot to race for this weekend for us.”

Duncan Ende, Dempsey Racing No. 25 ORECA FLM09 (PC) “It’s a very fast circuit with a short lap. How you manage traffic will be a huge factor in how your race goes. There are three good passing zones for the prototype cars. But, if you are held up a corner or two before, those passing zones go away. The Dempsey Racing guys have given us a great race car all year, and if we can keep our nose clean and stay out of trouble for the first few hours, we'll have a great race car for the finish.”

Nico Prost, Rebellion Racing No. 12 Lola-Toyota (P1) “It is a hard time finding your way through the traffic. We are on the pace and everything seems OK. Andrea (Belicchi) had a very good lap. We usually race in fields with 28 to 30 car and tracks that are a little bigger than Road Atlanta. There are very few GT cars in Europe, so for us it is something for us to learn again from last year’s Petit Le Mans. You cannot push all the time around here or you will have a big problem. We will make a big gain in setup and gain more experience for the drivers in each of the practices tomorrow.”

Patrick Long, Flying Lizard Motorsports No. 45 Porsche 911 GT3 RSR (GT) “The focus is all on this weekend and executing a perfect race to come out of here with a win. Without the one slip up in Canada, I think we’d be in a much different position in the championship. But, at this point, we want a Petit Le Mans victory. We haven’t had one in a few years. We’ve scored more points than anyone the last five or six events, and the car is as developed as it’s ever been. We’re fully going for a victory.”

The Viper GTS-R is back at Road Atlanta in 2012

Does the DeltaWing lack an on track presence? - Video

David Pearson - The Man Who Wood be King

David Pearson - The Man Who Wood be King