Muscle Milk Pickett Racing, Level 5 Motorsports and Rebellion Racing were the big winners Saturday at Petit Le Mans powered by Mazda. Rebellion’s Neel Jani, Andrea Belicchi and Nicolas Prost won the 1,000-mile race for the first time with a three-lap victory in their Lola-Toyota on a day filled with drama at Road Atlanta. 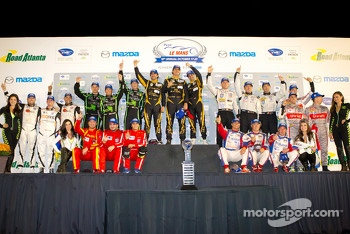 P1: The winners and the champions

Muscle Milk Pickett Racing captured the big prize with the P1 drivers’ and team championship in the American Le Mans Series presented by Tequila Patrón. Lucas Luhr and Klaus Graf finished third in class but completed enough laps to sew up both titles.

An early accident and hour-long repair knocked the No. 6 Honda Performance Development ARX-03a out of the hunt for the race victory in the opening hour. Luhr made contact with Peter LeSaffre’s Green Hornet Racing No. 34 Porsche 911 GT3 RSR on the uphill run to Turn 2. Luhr attempted to pass underneath the Porsche, which turned down onto the prototype.

“I think we had a very good car to fight Rebellion,” Luhr said. “The way the (Muscle Milk crew) acted in the pits and the way they stuck together, they focused on getting the car back out. You can be, as a driver, proud to be part of something strong.”

The incident damaged the suspension on the HPD prototype and forced the car back to the paddock for 65 minutes worth of repairs. Muscle Milk lost 41 laps to the Rebellion car during the stop and had to pit again for additional adjustments. But the car never appeared in danger of falling below the threshold of 70 percent of the race distance required to score points.

“The tire wear was quite severe after my first stint, so we thought it would be better to adjust it to not take any risks,” Graf said. “When the team said we won the championship we were relieved, but the conditions were getting more and more difficult. We won a lot of races this year, and we definitely deserved this championship. I don’t think it has sunk in yet. It might take some time.”

Luhr was leading at the time of the crash, having passed Jani 20 minutes earlier. The Rebellion Lola never fell out of the lead again and won its first overall race of the season. Dyson Racing’s No. 16 Lola-Mazda of Chris Dyson, Guy Smith and Steven Kane was second in class.

“We knew we needed to stay on the track,” Belicchi said of Rebellion’s win. “There was so much traffic here. The team on the radio was giving me so much support. I was focused to put the car in a good spot for the end of the race.”

Extreme Speed Motorsports won the GT category from pole position, but its 1,000-mile journey to the top step of the podium was by no means an easy one. Scott Sharp came under fire early in the race from the No. 4 Chevrolet Corvette C6 ZR1 driven by Oliver Gavin, but teammate Johannes van Overbeek was able put the No. 01 Ferrari F458 Italia back out front.

“It was good to be able to lead a bit,” Sharp said. “Toward the end of my run, Gavin got underneath me, I was just trying to hang on; (the car) was getting looser and looser. We put some stickers on for Johannes, and he was flying right away.”

Van Overbeek, Sharp and Toni Vilander each faced additional challenges from the No. 4 and No. 3 Corvettes as well as from BMW Team RLL’s No. 55 BMW E92 M3. When the No. 4 Corvette C6 ZR1 retreated to the paddock to address a suspension issue at the six-hour mark and the No. 55 was issued a pit lane penalty with 30 minutes remaining, Vilander had some breathing room for the closing laps. This provided only partial relief as the team took a gamble on fuel strategy and stayed on course while Antonio Garcia pitted the No. 3 Corvette. ESM’s gamble paid off, and Vilander crossed the finish line with a 30-second margin of victory over Garcia’s Corvette.

“2010 was on my mind when we ran out of fuel in (Turn) 10a,” Vilander said. “My engineer, Lee, was on the radio most of my last stint. I did everything I could to save fuel. We were so relieved when I went by 10a and knew I had enough fuel. There was a lot of emotion. I've been traveling a lot this year, being away from the family. These are the moments we do it, and we do this racing stuff.”

The win came on the same weekend the ESM team was sporting a flashy new chrome livery featuring Ultimat Vodka.

“Both cars were probably the fastest cars all week,” Patrón Spirits President and CEO, and ESM teammate Ed Brown said. “The team has really matured this year. They said I couldn’t change the scheme, because it's a good luck scheme. This team has really worked so hard to win this race. I think it will soak in tomorrow. My hat’s off to the team; they did an unbelievable job.”

Garcia, Jan Magnussen and Jordan Taylor shared a runner-up finish for Corvette Racing, which clinched the team and manufacturer’s title at VIRginia International Raceway in September, as well as the driver’s championship for Gavin and Tommy Milner. The runner-up finish at Petit Le Mans added one more trophy to Corvette’s 2012 showcase: the MICHELIN® GREEN X® Challenge GT Championship. Though ESM won the MGXC race, the No. 3 Corvette won the war by racing the cleanest, fastest and most efficient season of all.

Level 5 Motorsports’ Scott Tucker and Christophe Bouchut repeated as P2 driver champions with a class victory alongside Luis Diaz in their No. 95 HPD ARX-03b. The trio took the lead for good when Conquest Racing’s Martin Plowman went off track and then was penalized for speeding in pit lane with 20 minutes left.

Just as it has been all season, Saturday’s P2 race was another duel between Level 5’s two prototypes and the Conquest Morgan-Nissan. Like Muscle Milk, Level 5 needed to finish 70 percent of the class winner’s race distance. Tucker, Bouchut and Diaz made that a moot point with an 8.196-second victory.

“We have a really good car,” Bouchut said. “It does so well in traffic. This race is so special. It is a mix of being risky and patient. We saw a lot that it was easy to make contact and lose track position. But, we had a perfect race.”

For a while the advantage lay with the No. 055 Level 5 entry of Tucker, Dario Franchitti and Marino Franchitti. Two costly penalties did the car in during the race’s second half, and it finished second in P2. The No. 46 ORECA-Nissan of Thiriet by TDS Racing placed third with Mathias Beche, Pierre Thiriet and Christophe Tinseau driving.

“We've been through this before with our first Prototype Challenge championship (in 2010) that came down to the last race,” said Tucker, who won his third straight ALMS class title. “We knew it would be tight. Conquest are great competitors. We knew 70 percent would be no easy task.”

CORE autosport capped off its banner season with its eighth Prototype Challenge victory of the season. The trio of Alex Popow, Ryan Dalziel and Mark Wilkins drove its No. 06 ORECA FLM09 to the win by two laps over RSR Racing. Popow won for the fifth time in his rookie season and clinched the class driving title last month at VIR.

“For sure, it was a great race,” Popow said. “Ryan and Mark did an awesome job. We had a lot of bad luck with the yellows, but we made it all back. It was a great race. For me it has been an amazing season – one I will never forget. I feel like I made a great evolution as a driver and hope I can keep learning and go to a higher level every time from here.”

The winning CORE entry took its first lead at the two-hour, 37-minute mark with Dalziel at the wheel. The No. 06 led for almost five straight hours before Jon Bennett in the No. 05 CORE car moved into first when the No. 06 pitted. Popow handed over to Dalziel, who moved back to the front for good 20 minutes later.

“There are always lots of close calls with all the different classes,” Wilkins said. “The guys at CORE prepped a great car for us. It was easy to drive. Cooler heads prevailed in traffic, and that was the key to winning in this car.”

The unclassified Nissan DeltaWing finished sixth overall after starting the race from the back of the grid. The unique prototype driven by Gunnar Jeannette and Lucas Ordonez completed 388 laps.

The DeltaWing – featuring half the weight, half the horsepower and half the aerodynamic drag but all the performance of a typical Le Mans prototype – went from 42nd to 10th overall in the race’s first 37 minutes. It ran as highly as third overall in its first North American race and first since debuting in June at the 24 Hours of Le Mans.

Consistently running in the top-three with drivers Henrique Cisneros, Mario Farnbacher and Jakub Giermaziak, NGT kept the nose of its No. 30 Porsche 911 GT3 Cup pointed forward while both AJR and TRG made costly, off-course excursions. Giermaziak was chasing AJR’s Leh Keen in the closing minutes of the race when Keen launched his No. 22 Porsche 911 GT3 Cup over the curbing at Turn 10. That enabled Giermaziak to sneak past and into the lead, which he held to the checkered flag.

“It was a really tough race,” Giermaziak said. “We really pulled out a big gap twice; then we got the yellows. It was my first race in the States, so there were a bit different rules. We were the slowest class going around with so much traffic and other classes. I was able to put the pressure on Leh Keen; he made a mistake and we were able to get around him. I am hoping to get more races over here in the States.”

Spencer Pumpelly, Emilio Di Guida and Nelson Canache finished second in TRG’s No. 66 Porsche 911 GT3 Cup. The team fought back for the runner-up finish after Pumpelly lodged himself in the Turn 10 gravel at the race’s halfway mark. The team’s second entry – the No. 68 Porsche 911 GT3 Cup driven by Emmanuel Collard, Manuel Gutierrez, Jr. and Mike Hedlund – finished third.

Though a Petit Le Mans win escaped it, Alex Job Racing had already clinched the GTC team championship at VIR in September and the driver’s championship for Cooper MacNeil.

The GTE-Am category, part of the European Le Mans Series, was won by IMSA Performance Matmut and its No. 67 Porsche 911 GT3 RSR driven by Anthony Pons, Raymond Narac and Nicolas Armindo.