The BAR1 Motorsport Oreca FLM-09 was fastest in the PC class, as was the Risi Competizone Ferrari F458 Italia in the GT. The Flying Lizard Porsche lead the way in the GTC class. 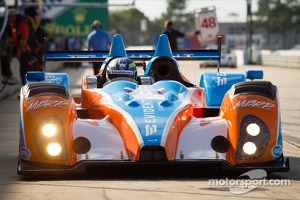 Leading the way in the popular GT class was the Risi Competizione Ferrari F458 Italia of Olivier Beretta and Matteo Malucelli. Their fastest lap of 112.329 mph was accomplished in the afternoon test run.

The Tequila Patron Ferrari F458 Italia of Scott Sharp and Johannes van Overbeek had the second fastest time. A team car struck the third turn fence in the morning and did not return to action.

In the GTC group, the Flying Lizard Motorsports Porsche 911 GT3 Cup led the way with a speed of 106.805 mph. The sleek racer is being driven by Spencer Pumpelly, Nelson Canache and Archie Hamilton.

Ryan Dalziel took his introductory laps in the SRT Motorsports SRT Viper GTS-R and was satisfied with the outcome. “Everything was good after I shook off my Daytona Prototype mode,” the Floridian said. “The car feels really nice and it is pretty easy to drive. The power is good and the car is balanced.”

Dalziel said he had been talking with the team for a year but the arrangement only came together in the last month. Initially, IndyCar champion Ryan Hunter-Reay had the ride but other commitments forced his withdrawal. Dalziel, the 2012 P2 victor at the 24 Hours of LeMans, will be with the SRT team for Sebring, the Petit LeMans and the 24 hour event. 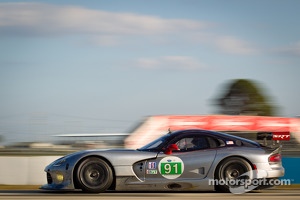 The ace driver said it has been a while since he has driven a front-engine car but said he adapts quickly. “As long as it has four wheels and a steering wheel, I can figure it out,” he quipped.

Dyson Racing announced today that veteran driver Butch Leitzinger would return to the team for the Sebring endurance race, teaming with Chris Dyson and Guy Smith. The Pennsylvania native raced for the Dyson organization for 18 years, winning three championships for them. Leitzinger and the Dyson team recently had a successful test at Sebring.

Butch Leitzinger joins Dyson Racing for the 12 Hours of Sebring