INDIANAPOLIS - After a long break in the ALMS racing schedule, Muscle Milk Pickett Racing is anxious to get back to competition next week at the American Le Mans Northeast Grand Prix at Lime Rock Park as it looks to defend last season's race win. 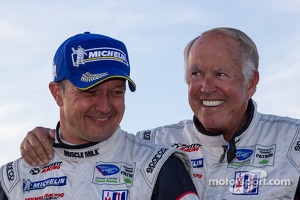 The team's victory last year at the 1.474-mile, seven-turn road course was one for the ages as the duo of Klaus Graf and Lucas Luhr came back from four laps down to score what was a third consecutive win in 2012.

That triumph isn't the only memorable one for the Greg Pickett-led team, as the Muscle Milk squad also scored their first overall win at Lime Rock Park in 2010.

As was the case last year, Pickett Racing is looking to keep its winning streak alive with Graf and Luhr having won the two previous events at Laguna Seca in May and Long Beach in April.

Once again the German duo will be facing tough competition with Dyson Racing wanting to do well at their home event. However, the P1 field will be without the team that has proven to be Pickett Racing's toughest competition this year with Rebellion Racing not entered into this event.

With no races on the schedule since May, the team has been keeping busy preparing for the remainder of the season. They took advantage of the Le Mans break to complete, amongst other things, a successful test at Road Atlanta.

The action kicks off at Lime Rock Park on Friday, July 5 with practice at 10:55 am ET. Qualifying will take place later that afternoon and will be streamed live on ESPN3.com and ALMS.com from 4:25 pm ET.

"We want to keep our streak alive at Lime Rock Park after winning the last two ALMS events. Lucas and I had to fight very hard at Lime Rock last year and we had an epic win in the end. Maybe we can have a little less drama this year!

"Even though the Rebellion team won't be competing against us at this race, the Dyson team will be very strong as always. They've had the speed all year and I'm sure they'll be very competitive at their home event.

"The Muscle Milk Pickett Racing team had a very productive test during the Le Mans break and we feel it gives us an advantage over our previous package. Lime Rock will be brutal as always with almost only right hand corners and crazy traffic. Patience and smart racing in traffic will be the key to success."

"I can't wait to get back in the Muscle Milk HPD P1 car, it has been a while since our last race at Laguna Seca.

"Lime Rock is a very short track and coming from Le Mans it always feel a bit strange. It's a track that also gives good racing.

"It's a shame that Rebellion won't be there as I enjoyed the fight with them and Jani a lot, but that's the way racing is sometimes. That said, I expect a good battle with Dyson Racing.

"I look forward to working with Brandon (Fry, chief engineer) and everyone at Muscle Milk Pickett Racing again, I've missed them!"