Dr. Don Panoz makes a switch on the DeltaWing project. He is taking the chassis in-house powered by Mazda. The new generation DeltaWing will be on the grid at Sebring.

When the DeltaWing project first made news, the odds of its finishing an endurance race were slim. While they gave it a go at the 2012 24 Hours of Le Mans, the experimental prototype earned a lot of praise; especially when their reason for not finishing was not due to their own accord. When Nissan signed on as the engine manufacturer, the marriage seen like one set in stone. However relationships do not always last.

The Nissan DeltaWing ran only two races. Their second one was at the American Le Mans Series (ALMS) Petit Le Mans at Road Atlanta. When the merger between the Grand-American series and the ALMS was announced with a start-up date in 2014, the DeltaWing was added to the plans of potential manufacturers, plus everyone already knows that Panoz wants to return to Le Mans.

Also departing the project was the man behind the design, Ben Bowlby. Add to the list was Dan Gurney’s All American Racers who built not only the car but special machinery for the needed parts. When Panoz took control, out of the project also was Ray Mallock Limited, and Highcroft Racing team owner Duncan Dayton. 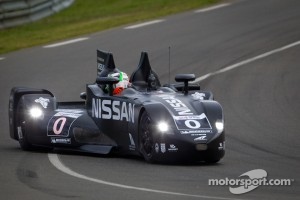 SPEEDtv.com’s Marshall Pruett posted an exclusive interview with Panoz, and the word spread that indeed the owner of Elan Motorsports Technologies and founder of the ALMS was taking the DeltaWing in a different direction. Elan will build the new chassis, and actually have the second-generation DeltaWing on the track for the Twelve Hours of Sebring next month in the LMP1 class.

For the 2013 ALMS season, the DeltaWing will have an open-top but plans are to have the coupe version by 2014. Dave Price will run the Panoz in-house operations – he was the boss during the earlier years for the Panoz prototype.

With the departure of Nissan, the new power plant will be Mazda. Per the Nissan statement: "The project came to a timely and satisfactory conclusion for us. Nissan is a forward thinking brand, always looking for innovative projects that challenge conventional thinking and that push us to develop new technologies and we are now looking ahead to the future and our next exciting project that we can bring to the fans."

No word on the tire manufacturer at this time but Michelin designed and produced special tires so it would be likely that they stay on the project.

Now that we all know the DeltaWing will continue, what exactly will the future hold? Is this the step for the new-generation to compete in the future sportscar series in North America or are they also viewing the opportunity to contest the 24 Hours of Le Mans and the Word Endurance Championship?