The 11th Petit Le Mans started off well for the no. 25 Dempsey Racing Oreca FLM09 Prototype Challenge car - a good omen for groom-in- waiting, Duncan Ende. The car, which would be shared by Ende, Ryan Lewis, and Henri Richard, would lead the Prototype Challenge class in the early stages. 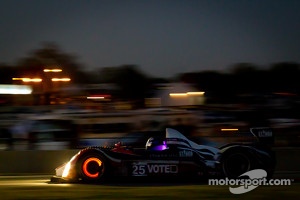 However, a series of events would derail the no. 25 Dempsey Racing PC car. After Lewis started the car - advancing it from third place to the lead of the PC class - a long pit stop caused by a malfunctioning fuel rig would drop the car to the back of the PC field, with Ende now at the wheel.

Two further incidents after Ende's first stint would cause significant damage to the car, dropping it well down the order. The Dempsey Racing crew would work heroics to repair the car twice in pit lane and get it back on track. After Ende enjoyed a second stint where he was able to make up two laps on the next car in class, Lewis brought the car home in sixth place in the Prototype Challenge class.

"When things aren't going well, this is a very long race," said Ende. "In my first stint, the car was really good and I was able to push it really hard, but we couldn't make up a lot of ground. I was able to make up two laps in my second stint, and the stint was really enjoyable, but with the damage to the car we didn't have much front aero and because of that we used up the front tires in one stint. Double-stinting was no longer an option.

"But our crew guys did another amazing job this weekend. They gave us a car that was good enough to lead the race and then fixed a lot of damage in a short amount of time to keep us on the track. Everyone on the Dempsey Racing team did a phenomenal job all year and I would really like to thank them for that. Even though we encountered a lot of adversity, we got on the podium twice and led a lot of races in a very competitive LMPC field."

With the 2012 racing season over, Ende will now encounter his biggest challenge of the year - getting to the altar to marry his fiancée, Teri, in December.

"Driving a PC car in the American Le Mans Series requires a lot of things - timing, commitment, and precision," said Ende. "I'd like to think that those skills will also be useful in marriage as well. If not, at least they can count on me to get to the ceremony on time. I can't wait to marry Teri, who in addition to being my fiancée, is also my biggest racing fan. She wants to win races just as badly as I do!"

Ende closes out the 2012 American Le Mans Series in fifth place in the Prototype Challenge class championship, with podium finishes at Lime Rock Park and the Baltimore Grand Prix in his first season of prototype racing.

With plans for 2013 in the works - as well as his wedding - Ende's racing plans for the new season will be announced in the coming months.