It's not as if the Peugeot 908 HDi FAP had lacked success in its racing career so far, but the French team is aiming higher yet for the 908's final season of Le Mans racing. 2009 Le Mans winning ...

It's not as if the Peugeot 908 HDi FAP had lacked success in its racing career so far, but the French team is aiming higher yet for the 908's final season of Le Mans racing. 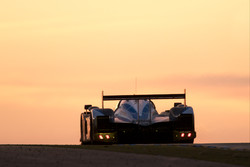 The new regulations from ACO (Automobile Clude de l'Ouest, the Le Mans organizing body) reduce the diesel engines' restrictor size by 1.5mm (to 37.8 mm) and the turbo pressure by 0.16 bar (to 2.59 bar), taking away some 40 hp of power.

To make up for this loss, the French manufacturer's engine design team has focused on reducing internal frictional losses inside the engine, and improving the efficiency of the intake exhaust systems. In addition, the bodywork features a new diffuser design and a different engine cover in the search of aerodynamic improvements.

"It might be the car's fourth season, but there has been no sign of its speed diminishing," said Bruno Famin, the Peugeot technical director. "Last year we believed we might be fractionally behind (Audi) in terms of performance, but in reality it was quite the opposite and the 908 was still one step ahead. It is quite clear that our rivals have responded and made significant progress with a car that is still only two years old. In terms of raw performance it wouldn't surprise me if we were very fractionally behind and that will set things up nicely for a 24-hour sprint race at Le Mans."

Peugeot will be looking to match or better its 1-2 finish at the Le Mans 24H, where the team were able to defeat its archrivals, Audi, for the first time. 2009 winners Marc Gene and Alexander Wurz, carrying the coveted #1 on their car, will be joined by Anthony Davidson, a former F1 driver but a newcomer to Peugeot.

"There will be three works cars and Hugues de Chaunac's team, Oreca, will run another at Le Mans and throughout the full Le Mans Series," explained Oliver Quesnel, the director of Peugeot Sport. "We wanted to give ourselves four opportunities to win <AD> it will be a vintage season and it is vital to do all we can to counter a formidable rival that is hungry for revenge.

Nicolas Minassian, Franck Montagny and Stephane Sarrazin will again form an all-French crew for the #2 car, while Sebastien Bourdais returns to the team in the #3, along with Simon Pagenaud and Pedro Lamy.

Peugeot will also again provide an 908 to an independent team, but this year it will be Oreca rather than Henrin Pescarolo's squad being granted the favour. Unlike 2009, though, Oreca's 908 will be a current specification, and not a previous-year one.

While the team are not planning to run a full Le Mans Series program, they will be bringing the powerful 908s to the rounds at Spa-Francorchamps in May and then Silverstone in September -- as well as the Asian Le Mans Series event in Shanghai, a part of the Intercontinental Cup, in November. Oreca, however, will run a full LMS program with their 908.

While the 908s will again seen at the American Le Mans Series season opener at Sebring next month, they have no plan to enter the Petit Le Mans race in September.