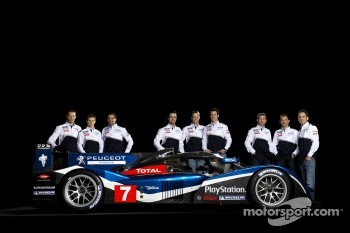 The Peugeot Sport drivers for 2011 with the Peugeot 908

The second edition of the Intercontinental Le Mans Cup will get underway in Florida, at the 12 Hours of Sebring. The line-up of the reigning champions, Team Peugeot Total, features two new Peugeot 908s, which will be making their first competitive outing. The no.7 car will be driven by the 2010 driver team champions, Alexander Wurz, Marc Geni and Anthony Davidson, whilst the no.8 car will be in the hands of Franck Montagny, Stiphane Sarrazin and Pedro Lamy.

After making its first track appearance on 27 July 2010, and being presented to the press and general public on 3 February of this year, the Peugeot 908 will be taking part in its very first race at Sebring (USA) on 19 March.

Powered by a 3.7-litre, HDi turbo diesel V8 engine with particulate filter, developing some 550hp, Peugeot Sport's latest creation will be one of the few cars in the LMP1 line-up to feature the 2011 regulatory configuration.

As initially planned in the schedule and technical development programme, two Peugeot 908s will compete in the Sebring race.

We need to be ready for the 24 Hours of Le Mans, whilst keeping a close eye on the championship.

"Our main objective in the United States is to accumulate experience", stresses Bruno Famin, Peugeot Sport's Technical Director. "The 908 is totally new car and like any new car, we'll need to work on it and spend time driving it in order, among other things, to develop its reliability. We'll therefore be following our specifications, aiming to complete the full 12 Hours so we can rack up plenty of track time and thus acquire valuable information about the car. We also need to learn how to get the best out of it. That's what we have been doing in private testing, but now we need to do it in race conditions. From both a technical and human perspective, there is still a lot to get to grasps with on all levels".

With a total of 56 competitors, the 12 Hours of Sebring promises to be a testing race. "It's an unusual event, where there is always a lot of incidents in the race", continues Olivier Quesnel, Peugeot Sport Director. "It's a typically American race with a lot of safety car periods and different rules to those at Le Mans, especially in terms of pit stops. It can all change in a flash! So it's a great exercise for our entire team the drivers, engineers and mechanics where the challenge is to perfect your preparation in what can sometimes be fairly extreme conditions. We need to be ready for the 24 Hours of Le Mans, whilst keeping a close eye on the championship". 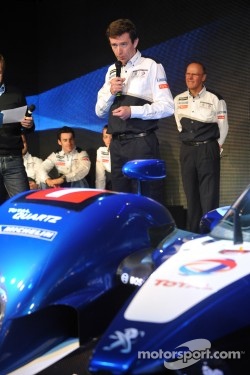 Winner of the inaugural ILMC endurance championship title, contested over just three rounds last year, but also the winner at Sebring in 2010, Team Peugeot Total is competing in the full 2011 race calendar. This year's ILMC has been expanded to seven rounds for 2011, the undoubted highlight being the 24 Hours of Le Mans. "First and foremost, our aim is to win the race in June", insists Olivier Quesnel. "But of course, if we don't have any particular problems in Sebring from a sporting or technical point of view, the result will look after itself".

In the number 7 car, recognisable by its blue rear-view mirrors, the winning driver team at last season's 12 Hours of Sebring lines up again this year with Marc Geni, Anthony Davidson and Alexander Wurz. Marc Geni will drive the car in qualifying and Alexander Wurz will be behind the wheel for the race start.

The 12 Hours of Sebring will get underway on Saturday 19 March at 10.30am (local time). Before then, Team Peugeot Total will be on site from this Saturday 12 March, to take part in initial private testing, followed by a very busy week's work.