The Muscle Milk HPD ARX-03c was in a class of its own on Saturday at the track better known as Mosport.

Bowmanville, ON - It may be a new season but Muscle Milk Pickett Racing doesn't mind doing the same thing over and over and over again when they visit the Canadian Tire Motorsport Park.

For the fourth year in a row the team, with driver Klaus Graf, has qualified on pole position for Sunday's main event at the 2.459-mile, 10 turn road course. 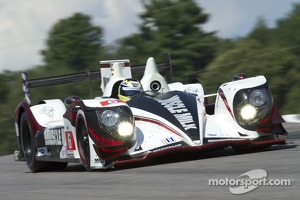 The Muscle Milk HPD ARX-03c was in a class of its own on Saturday at the track better known as Mosport.

The team led both morning practice sessions by more than three seconds on second place and continued to do much of the same in qualifying as Graf registered a lap time 2.9 seconds quicker than the second place car.

The German was quick right out of the box in the qualifying session, immediately putting three seconds on the competition. He went on to improve on each lap until he put in a time of one minute 5.871 seconds, which was six tenths quicker than their pole time from last year.

The pole position was the team's second consecutive one this year as well as Graf's ninth career Fast Qualifier.

Muscle Milk Pickett Racing will be back in action at 9:10 am for the morning warm up ahead of Round 5 on the 2013 American Le Mans Series schedule.

Klaus Graf - driver #6 Muscle Milk HPD ARX-03c: "I had a really good run. The car worked very well. The Muscle Milk crew did a good job in practice as we made a lot of changes.

"Shortly before the end of the second practice session I wasn't too happy but we made another adjustment and we hit the sweet spot with our Muscle Milk car and it was really good in qualifying. The track changes they made here improved some areas in terms of grip as well so it was a good day.

"The Michelin tires also came in perfect, we hit the sweet spot as well with the pressure and the temperature which is almost always a little bit critical especially on a quick track like here, it's not always easy.

"I was very happy, I had a lot fun. I love this place. It's a lot of fun if you have the car right and it's doing what it's suppose to do. I really look forward to the race tomorrow."