Watch video below: Muscle Milk HPD ARX-03a lap around streets of Baltimore with Klaus Graf in 2012.

INDIANAPOLIS - If there is one race on the American Le Mans Series schedule that Muscle Milk Pickett Racing hasn't quite 'tamed' yet, it's the Grand Prix of Baltimore presented by SRT, but it's something the team is looking to change this weekend as they enter round 7 of the season. 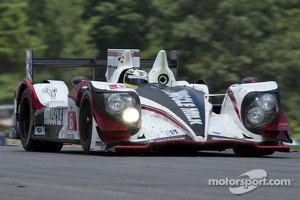 The team certainly hasn't had any luck on the streets of Baltimore. In its first appearance, in 2011, the Greg Pickett-led squad finished fourth after an issue made them miss all practice and qualifying sessions and while they finished third last year, it wasn't the finish they were hoping for after encountering a problem that likely cost them a win.

For this year's visit, the Muscle Milk team is hoping to turn that luck around and continue its winning streak that started at Long Beach back in April.

In addition to vying for a sixth consecutive victory this season, Pickett Racing, with drivers Klaus Graf and Lucas Luhr, are looking to clinch the Team and Driver P1 Championships by completing 70% of the race distance.

However, as they have learned in the past, it won't be an easy feat around the bumpy and demanding 2.02-mile, 12-turn street circuit, but as they've also proven, the team is ready to take on any challenge that is put in front of them.

Drivers Luhr and Graf will be on track starting at 8:50 am ET on Friday, August 30 for the first practice session. Qualifying will take place later that day and will be streamed live on ESPN3.com from 4:20 pm ET.

The Grand Prix of Baltimore will go green on Saturday, August 31 at 3:45 pm ET with live online coverage on ESPN3.com. The race will be broadcast on tape-delay starting at Noon ET on Sunday, September 1.

Klaus Graf - driver #6 Muscle Milk HPD ARX-03c: "I very much look forward to the Grand Prix of Baltimore. The race has created a fantastic atmosphere the first two years and every year a huge crowd has been present. "Muscle Milk Pickett Racing can seal the deal on this year's ALMS Championship with a podium finish.

That will be our goal for this race, although we definitely want to win this race since we have not been able to achieve that so far. "The layout and the bumps of the Baltimore track are challenging for the drivers and you need to be focused every second you're on the track. We want to keep our streak alive and we'll be as concentrated and prepared as always."

Lucas Luhr - driver #6 Muscle Milk HPD ARX-03c: "The Grand Prix of Baltimore is a great event with a great track layout that is very challenging. I love street circuits so I very much look forward to this race.

"Last year we had some problems in the race, therefore, I'm hoping for a good race this season and making it six wins in a row for Muscle Milk Pickett Racing.

"After experiencing, and really enjoying my first INDYCAR race last weekend at Sonoma, I can't wait to get back in our Muscle Milk HPD as we try to clinch the Championship this weekend."

Grand Prix of Baltimore up next for Flying Lizard Motorsports