The race ended under a fourth full course caution with about eight minutes to go giving Pickett Racing their fifth win this season. 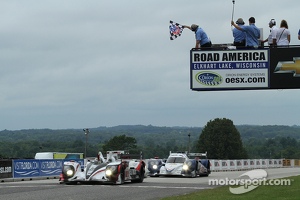 However, the win didn't come as easily as the last couple of victories the team recently picked up as they had to fight their way back to the front of the field a couple of times.

The two hour and 45 minute race started in wet conditions and also had a bunch of full course cautions that tightened up the field, which meant the Muscle Milk drivers were not able to drive away from the competition early on in the race. Due to different pit strategies, the team found themselves in third position overall after their first pit stop, only to climb their way back to first about 10 laps later.

The same thing happened after the team's second stop in which Klaus Graf got aboard the Muscle Milk HPD ARX-03c, except this time it only took six laps for the German to regain the lead.

Lucas at Road America Once Graf found himself ahead of the field with about 51 minutes to go, he never looked back and built a gap that allowed him to enter and exit pit lane for a final fuel stop in first place.

The race ended under a fourth full course caution with about eight minutes to go giving Pickett Racing their fifth win this season.

The win was also the 46th career win for Lucas Luhr and the 19th for Klaus Graf.

Muscle Milk Pickett Racing will be back in action in a few weeks time at the Baltimore Grand Prix on August 31, 2013.

Lucas Luhr - driver #6 Muscle Milk HPD ARX-03c: "It was another good day for Muscle Milk Pickett Racing. It was a little bit tricky at the beginning because no one had practiced in wet conditions over the weekend and I can't remember when was the last time I drove our car in the wet. Plus, there were changing conditions on the circuit. There were some spots that were very slippery and some a little bit better. So I didn't take a lot of risks at the beginning.

"We discussed on the radio when was the best time to go to the slick tires. We were not the first ones but I think we made the right decision.

"From then on it was pretty much business as usual. I still had to push but we had a very good, fast car, especially in the drying conditions and as the track got drier it was more in our favor. At the end of the day it was a pretty good day for us."

Klaus Graf - driver #6 Muscle Milk HPD ARX-03c: "When I got in the car the track was pretty much dry, but not completely. It looked like the track dried differently in some places. Some areas were really good and even if we did lap times in the range of what we did in practice I would say the track wasn't completely up to the speed like we had in practice from a grip standpoint. However, I was quite happy with the pace of the car and we made the right call on leaving the tires on when I pitted for fuel the last time. The Michelin tires were good enough to double stint.

"This win, even if it was pretty clear at the end, wasn't as easy as it might have looked due to all the conditions changing and the way the yellows came out. We still had to stay on top of it and stay focused. Because it's such a long lap here you don't really get a lap ahead easily so every caution period, everyone gets bunched up and they have the opportunity again to attack you. From that point of view, I was very pleased. We stayed sharp, as we always do.

"Five wins in a row is very good. Lucas is pretty clear now on the overall ALMS wins so that is great for him to probably go into history with that record. We're very pleased at Muscle Milk Pickett racing today."