The DeltaWing lives and will be at the American Le Mans Series opener: the historic Twelve Hours of Sebring.

The DeltaWing will be on the track at Sebring, Florida with two well-known sportscar drivers Oliver Pla and Andy Meyrick. With DeltaWing car now in the hands of Dr. Don Panoz's Elan Technologies there have been revisions. For starts, the team has a new name: DeltaWing Racing Car.

“Don Panoz is one of the key supporters of sports car racing in America and worldwide and I have full belief in the program and team that he has put together,” said Meyrick.

The first public showing of the DeltaWing took place last year at the historic venue where Marino Franchitti took it for a test run on the Sebring circuit. However now the new LMP1 DeltaWing will make its official debut in the 12 hour contest for the American Le Mans Series season opener with new team boss, David Price.

Frenchman Pla is one of the drivers on the OAK Racing team contesting the 24 Hours of Le Mans and the World Endurance Championship, but for this event, he will take on a new challenge. “As a racing driver it’s an honor to be part of this racing program, and as an OAK Racing driver I want to thank them to let me drive the DeltaWing.” 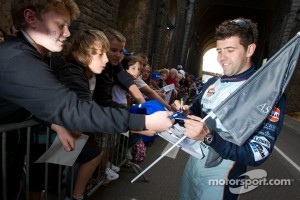 Meyrick commented: “It is a real privilege to be part of this racing program,” added Meyrick. “The DeltaWing is a revolutionary racing car that challenges the way we go about racing. I am excited and extremely motivated to work with Don Panoz and DeltaWing Racing Cars.”

Pla knows that the challenge is not just the endurance contest or the transition on the old airfield between the asphalt and concrete sections, the Frenchman is well aware of the challenge the unique design of the DeltaWing.

“I think the DeltaWing has been built to have the minimum amount of drag, but can still produce a good amount of downforce with the floor,” said Pla. “I should get to use to it from my years in single-seaters and now with my experience in LMP1 and LMP2. I’m sure we will have a lot of things to learn, and it will be very interesting.”