Oliver Gavin:"Now we look towards Baltimore which is always fun – more street fighting to stay at the top!”

Oliver Gavin’s third place finish at today’s Orion Energy 245 at Road America not only gave he and his Corvette Racing team mate Tommy Milner their third podium from the six races of the 2013 ALMS season to date, but it also rewarded them with enough points to regain the lead of the GT Drivers’ points classification.

The GT race was won by the #91 Viper of Dominik Farnbacher and Mark Goossens and the #3 Corvette of Jan Magnussen and Antonio Garcia was second. 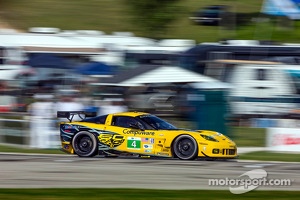 After Olly qualified in third place on the GT grid, the start was taken by Tommy in the No.4 Corvette C6.R. The track had been soaked by a persistent rain shower for the two hours prior to the race start, and there was considerable spray and jostling for position as the 33-strong field set off.

After stopping for fuel under the first of the four full course caution periods, and slick tyres just a few laps later as the track was rapidly drying, Tommy continued to circulate and try to make up lost ground until he came into the pits to hand over to Olly at the 1 hour 30 minute mark. What happened then was a defining point in the duo’s race, as Olly explains.

“When we came in for our third pit stop and the driver change we were in 8th place (in GT). We left the pits in 3rd so I can’t really say I’m disappointed with the result at all as it was a spectacular job by the guys.

“I managed to get past the Ferrari at the re-start – there was a little bit of rubbing and contact – and then the #91 Viper was coming up on me really fast. We knew it was going to be really close between them and us but they had a lot of straight line speed and we also had to factor in saving fuel and trying to get to the end.

“The whole time through that last 45 minutes we were trying to save fuel but maintain our position in a big train of cars. The Viper got me and was then onto Antonio but it was all going to be down to fuel. The final safety car period came out with about ten minutes to go and to be honest it was a real disappointment as I’d worked so hard to save the fuel and stay in the race and we were right there, we would have made it.

The Viper was apparently on fuel reserve on the final lap even with the safety car – it was very close for many of us but I think we had enough to do it and we could have possibly won.

“I’m thrilled to be back in the points lead though and to follow up our win in Canada with another podium. Now we look towards Baltimore which is always fun – more street fighting to stay at the top!”