Polar opposite futures for Corvette squads

There are only six cars entered in what could be the swansong for the GT1 class at the Le Mans 24 Hours this year. Four of them are Chevy Corvette C6.Rs; this year there will be no factory competition from the Prodrive Aston Martin DBR9s but instead ...

There are only six cars entered in what could be the swansong for the GT1 class at the Le Mans 24 Hours this year. Four of them are Chevy Corvette C6.Rs; this year there will be no factory competition from the Prodrive Aston Martin DBR9s but instead one privateer Aston from Austria and a Japanese Lamborghini Murcielago. 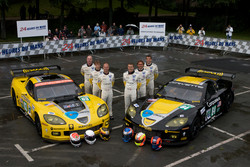 Corvette Racing looks to return to the top step of the podium after the Prodrive Astons have won here the last two years.

The two teams fielding the C6.Rs could not be headed in more separate directions. Corvette Racing, run and prepared by Pratt & Miller in the USA, is signing off its GT1 program after an incredibly successful ten-year run, both in the American Le Mans Series and at the 24H.

In contrast, Luc Alphand Adventures, the customer team that runs older C6.Rs, is unsure of its future in the sport without the factory Corvettes in the same category from the rest of 2009 forward.

Corvette Racing has won five times at Le Mans and searches for its sixth GT1 title in its final run of the rumbling, seven liter small-block V8.

"It is one of the soundtracks of Le Mans, this rumbling V8 around Le Mans," Oliver "Olly" Gavin recalled with emphasis. "Although the new GT2 is similar, it's sad that this distinct sound is going away."

Gavin was part of the winning team for the #64 Corvette's last class triumph in 2006, driving with Olivier Beretta and Jan Magnussen. Magnussen has split to the team's lead car, the #63, the last few seasons, driving this weekend with Johnny O'Connell and Antonio Garcia.

Details were vague on the future of the GT2 program, Corvette looking to keep the cards close to the vest when it comes to their future plans. But that's not to say the drivers weren't sounding bullish.

"Us going to GT2 is like Arnold Schwarzenegger and all the other body builders getting off steroids and going natural," O'Connell quipped. "We're still looking pretty buff, but coming clean. I'd just say to be worried if you're in a Porsche or a Ferrari."

Rick Voegelin of Chevrolet Racing Communications said the team is right on course to debut two GT2s at Mid-Ohio in ALMS later this year. He explained what might happen to the C6.Rs, and whether they might be retired overall as a result of the new ACO (Automobile Club de l'Ouest) regulations.

"The GT1 C6.Rs belong to GM, and eventually will be sold to the highest bidders," Voegelin said. "In the past, many of the team's C5-Rs and C6.Rs have been purchased by European race teams, like Luc Alphand, SRT, Phoenix Carsport, DKR, etc."

"However, with the GT rule changes that will take effect in 2010, there won't be a place to race the current cars in FIA GT and other series with similar rules, so it's likely they will be purchased by collectors," he added.

With Aston out of the way, one might expect the road to victory to be easier for the Pratt & Miller Corvettes in this case. Not so, O'Connell warned. 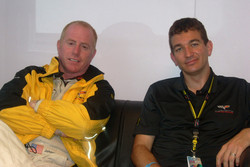 "It's funny because when you become a dynasty, like say the New York Yankees or the Green Bay Packers, when you don't win, the letdown is great," O'Connell said. "Every single obstacle remains for us. There are still some strong teams with strong lineups here we have to beat."

Gavin, who drives this weekend with Beretta and Marcel Fassler, described the disappointment of not having the battle with the factory DBR9s as in years past.

"We are going to miss Prodrive Aston Martin this year," Gavin said. "The feeling was mutual. It is amazing, each time to be no more than a lap back, ever, after 24 hours of racing. We still have got to be there at the end of 24 hours. You have to race the race, and get through to the finish."

The Alphand squad hopes to do likewise and has a very good shot at a podium finish, if not an overall class triumph.

Luc Alphand, the charismatic leader of one of France's most popular racing squads and Le Mans Series regulars, said although discussions are occurring between the team and GM regarding the future of the C6.R program, nothing substantive has been decided.

"We just don't know what will happen," Alphand said. "We had a good meeting with Pratt & Miller, about the new GT2, or perhaps the old GT1. Maybe the FIA or people like that will make a suggestion, but it is hard for everyone to buy new cars."

Alphand is lead driver of the #72 C6.R, a part-time rally driver (he has raced in the Dakar Rally) and a former World Cup French alpine skier. He suggested the ACO come up with a set of rules to allow for teams that don't have the necessary budget for development on the car to allow for an equivalency formula for the C6.Rs to run in a single GT class from 2010 forward.

"Maybe it is possible to use the old GT1s with an adaption to GT2, but we don't know what happens yet in the future," Alphand said. "Even GM and Pratt & Miller, nobody knows what will be the future." 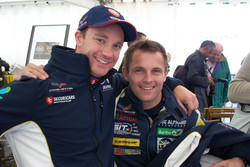 Dutch driver Xavier Maassen, of no relation to Porsche factory driver Sascha Maassen, noted that a potential new GT1 world championship out of the FIA GT ranks could be a place for Alphand to run the C6.Rs if in fact the team acquires the Corvette Racing fleet of cars.

Xavier Maassen is paired with fellow Le Mans rookies Julien Jousse and Yann Clairay in Alphand's second car, #73. Alphand will drive with Patrice Goueslard and Stephan Gregoire in the lead #72.

"It's going to be interesting what happens over the winter, because GT2 will be in LMS, ALMS, and the new category," Maassen said. "There is a prospect of an interesting new GT1 world championship, in four or five continents. It's quite promising and they might even use the old GT1 'Vettes for that, but still too early to see."

"The team is obviously looking at what to do next; with these cars, it is more or less finished for the moment," he added. "You have to wonder what Pratt & Miller want to do with these cars at the moment."

It is one of the distinctive parts of Le Mans, O'Connell summed up, as fans from all across the world flock to La Sarthe to witness and listen to the Corvettes.

"Internationally, our representation leaves a very good taste in everyone's mouth," O'Connell said. "There are so many unbelievable European Corvette fans, whether its thousands from Britain for Olly or psychotic people from Denmark for Jan. This truly shows the racing spirit of Corvette."

The factory Corvettes roll off first and second in class for tomorrow's 24 Hours of Le Mans, commencing at 3:00 p.m. local time.

Sainz: Ferrari can be ahead of McLaren at other F1 tracks