The 16th running of Petit Le Mans will be the final event in the storied history of the American Le Mans Series presented by Tequila Patrón.

The 16th running of Petit Le Mans Powered by Mazda on Saturday, Oct. 19, will mark the end of an era for North American sports car racing while anticipating a bright future for the sport.

The race will be the final event in the storied history of the American Le Mans Series presented by Tequila Patrón.

While bringing back memories of the past, it will also look to the future. In 2014, Petit Le Mans will be final event of the inaugural TUDOR United SportsCar Championship, with the ALMS and GRAND-AM Rolex Sports Car Series merging for next year’s competition.

Four of the five driver championships will be decided at Petit Le Mans, including GT, P2, GTC and Prototype Challenge presented by Continental Tire (PC).

Klaus Graf and Lucas Luhr will be seeking their ninth consecutive 2013 overall and P1 class victory in the event, with the Muscle Milk Pickett Racing drivers already wrapping up their second consecutive P1 championship.

Four drivers are in striking distance for the P2 title. Level 5 Motorsports’ Scott Tucker took over the lead with his seventh victory of the season at Virginia International Raceway. He has 149 points, followed by Extreme Speed Motorsports’ Scott Sharp (143) and Level 5 teammates Marino Franchitti (141) and Guy Cosmo (137). 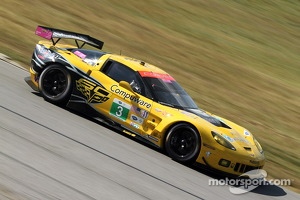 All that’s left is the GT driver championship, which Antonio Garcia and Jan Magnussen look to wrap up in Saturday’s season-ending Petit Le Mans. The drivers of the No. 3 Compuware Chevrolet Corvette C6 ZR1 currently hold a 16-point lead in the GT standings over BMW Team RLL driver Dirk Muller (125-100). Given that the Corvette drivers hold the tie breaker by winning three races to one for Muller, Garcia and Magnussen will clinch the title with a seventh-place finish should Muller win the finale.

Gunning for its ninth consecutive P1 victory, Muscle Milk Pickett Racing drivers Klaus Graf and Lucas Luhr face their toughest test since early in the season with the resurgence of Dyson Racing and the return of Rebellion Racing.

The No. 6 HPD ARX-03c has not been beaten since the season-opening Mobil 1 Twelve Hours of Sebring fueled by Fresh From Florida, with Luhr – the ALMS all-time leading winner – seeking a milestone 50th victory at Road Atlanta. 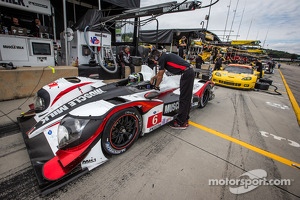 Rebellion will race for the first time since Round 3 at Mazda Raceway Laguna Seca with Nick Heidfeld, Neel Jani and Nicolas Prost entered in the No. 12 Lola B12/60 Toyota. Rebellion is the defending winner of the Petit Le Mans, with Jani, Prost and Andrea Belicchi winning in 2012.

Dyson Racing won the pole and led twice in the most recent ALMS race at Virginia International Raceway. Chris Dyson will be joined by Tony Burgess and Chris McMurry in the No. 16 Lola B12/60 Mazda at Petit Le Mans.

Seven drivers from ‘class of 1998’ returning for ALMS’ final event

The inaugural Petit Le Mans in 1998 sowed the seed that blossomed into the American Le Mans Series presented by Tequila Patrón the following year.

Seven drivers who participated in that debut race plan to return for the 16th Petit Le Mans, the final race under ALMS sanction. Uwe Alzen, Bill Auberlen, David Brabham, Emmanuel Collard, Joe Foster, Darren Law and Jorg Muller are set to bridge the first and most recent running of the event.

Collard was an overall winner of the inaugural race, joining Wayne Taylor and Eric van de Poele in a Ferrari 333SP. Brabham was the GT1 winner of that race – co-driving a Panoz Esperante GTR-1 with Scott Pruett, Eric Bernard and Andy Wallace. Brabham, a 23-race winner and two-time champion in ALMS competition, also won the 2010 Petit Le Mans.

The Metro Atlanta area is well represented in the American Le Mans Series presented by Tequila Patrón, with two teams and five drivers based in the area.

DeltaWing Racing Cars is based in Braselton. The team raced a revolutionary open-cockpit car at Le Mans and the Petit Le Mans in 2012, and returned for several races this season. Both Andy Meyrick and Katherine Legge each led eight laps at Road America in August, finishing fifth overall and third in the P1 class. The team debuted a closed-cockpit coupe version at Circuit of The Americas in September, and this version will be raced in this year’s Petit Le Mans. 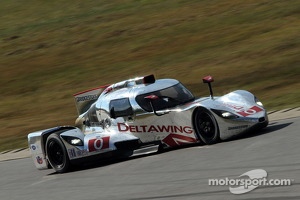 Dempsey Racing, from Flowery Branch, is owned by popular racer/actor Patrick Dempsey and Atlanta’s Joe Foster. The team had its best finish of the season with a third-place run last month at Circuit of The Americas in Austin, Texas.

Dempsey co-drives the team’s No. 27 Porsche 911 GT3 Cup with Foster and Andy Lally of Dacula, the 2011 NASCAR Sprint Cup Series Sunoco Rookie of the Year and a three-time champion in GRAND-AM Rolex Series competition.

Spencer Pumpelly of Atlanta is in contention for the GTC championship. He and co-driver Nelson Canache Jr. enter the season finale at Road Atlanta running third in the championship, 16 points behind the leaders. Pumpelly has two victories this season, driving a Porsche for Flying Lizard Motorsports. Pumpelly and Canache will be joined this weekend by Madison Snow.

Anthony Lazzaro of Atlanta drives in the P2 category, joining championship contender Scott Sharp and David Brabham in the No. 01 Tequila Patrón HPD ARX-03b. Lazzaro and Sharp finished second in the Grand Prix of Baltimore.in August.

Bryan Sellers of Braselton is a leading contender in the GT category, having three career victories in the No. 17 Team Falken Tire Porsche 911 GT3 RSR co-driven by Wolf Henzler and Nick Tandy.

Scott Tucker carries a three-year winning streak into Saturday’s Petit Le Mans. He won PC honors in 2010 while taking the P2 victory the past two years, all for Level 5 Motorsports. 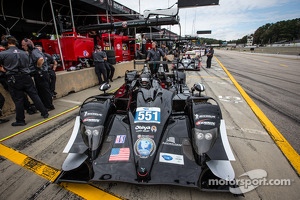 With the P2 team title already locked up, Tucker now is looking to capture the P2 drivers’ championship when he joins Ryan Briscoe and Marino Franchitti in the No. 551 Siemens/Alpina Watches/Ohiya Casino Resort HPD ARX-03b at the finale.

“The pressure is on,” Tucker said. “The team championship was one of our goals at the start of the season, so we’re proud to have locked that one up at VIR. But now we’re gunning for the driver’s championship. We have to put on our best game.”

Tucker, Briscoe and Franchitti opened the year by winning the Mobil 1 Twelve Hours of Sebring fueled by Fresh From Florida. After finishing third behind a 1-2 showing by ESM at Long Beach, Tucker won six of the next seven races. His lone DNF came at Baltimore, where he was taken out on the opening lap of the race. Franchitti and Guy Cosmo went on to win in the team’s No. 552 entry.

“The ESM guys have been coming on strong and they’re a good team,” Tucker said. “But our level of preparation has been high all year and we’ve had the results to prove it. I’m looking forward to the fight.”

ALMS, etc.
- Charles Espenlaub, who drove the pace car at the inaugural Petit Le Mans in 1998, will join Dempsey Racing for Saturday’s event, joining Charles Putman and Darren Law in the No. 10 Dempsey Racing Porsche 911 GT3 Cup. Espenlaub’s lone Petit Le Mans start was in 2004, when he finished 11th in GT.

Sweedler, Keen and Mowlem in for last ALMS Petit Le Mans in Ferrari

Ollie Millroy will return to the Asian Le Mans Series this season with the same Team AAI squad for whom he helped secure the 2014 GT Teams’ and Drivers’ titles.

The motorsports world suffered many losses this season, and are remembered in this top moment story by Motorsport.com.