BRASELTON, Ga. (Oct. 19, 2012) - With much of the focus this week on the P1 and P2 championships in the American Le Mans Series presented by Tequila Patrón, Neel Jani stole the show Friday at Petit Le Mans. The Swiss driver took pole position for Rebellion Racing with a lap of 1:09.089 (132.351 mph) in his No. 12 Lola-Toyota coupe – the first honor in ALMS for the Swiss team. 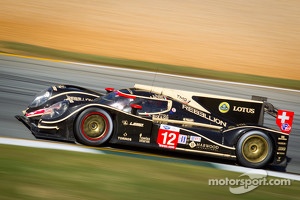 “We know qualifying is just a very small thing,” said Jani, driving with Nico Prost and Andrea Belicchi. “The race is a totally different game. We won't interfere with the other cars. We will just run our own race. We want to win. That was why we came over here.”

The Rebellion trio finished fifth in last year’s race. Saturday’s enduro stands to be just as competitive given the top three cars qualified within a second of each other. Guy Smith was third in Dyson Racing’s No. 16 Lola-Mazda coupe that he drives with Chris Dyson and Steven Kane following a lap of 1:10.176 (130.301 mph). 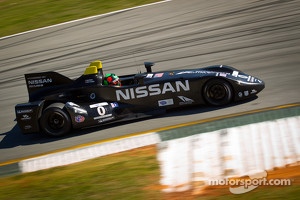 Meanwhile, Jani is planning to enjoy the weekend before getting on a plane to fly to China on Sunday for the next round of the FIA World Endurance Championship.

“We very much enjoy racing here,” he said. “We like the American tracks. When you look at the atmosphere, look around the track and see all the spectators and the camping going on… it's a big party which makes us enjoy racing around even that much more.”

The other big story of the weekend is the Nissan DeltaWing. After crashing in Wednesday’s test session and shakedown in practice Thursday night, the revolutionary prototype posted the 10th fastest time in qualifying with Gunnar Jeannette’s time of 1:12.850 (125.518 mph). He drives with Lucas Ordonez.

The car is running unclassified so it will start from the rear of the grid. The DeltaWing features half the weight, half the horsepower and half the aerodynamic drag but all of the performance of a typical Le Mans prototype.

One race after it scored its first ALMS pole position, Extreme Speed Motorsports earned another Friday. Toni Vilander set a time of 1:18.729 116.145 mph) in the No. 01 Ferrari F458 Italia he drives with Scott Sharp and Johannes van Overbeek. 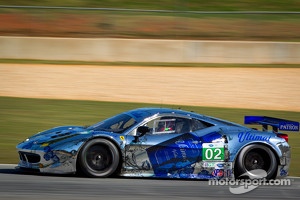 ESM appeared to sweep the GT front row until the No. 02 Ferrari failed post-race inspection due to a ride height violation. Guy Cosmo had turned a lap of 1:18.677 (116.222 mph). The car will start the race from the back of the grid.

“I’m very happy. It is good to be here with ESM,” Vilander said. “I’ve been enjoying the whole week and can’t wait for the race to start. I think we are in good shape. The Ferrari feels really good. I’m really happy with the performance of the team. It has been good all year but we even made a step forward this week.”

Olivier Pla continued Europe’s prototype party with the P2 pole position in Oak Racing’s No. 35 Morgan-Nissan. His time of 1:12.046 (126.919 mph) was only 0.002 seconds clear of Martin Plowman and Conquest Endurance’s Morgan-Nissan.

Pla also was the P2 fastest qualifier at the season’s opening race at Sebring in March.

“The car felt great,” said the Frenchman, who drives with Bertrand Baguette and Jacques Nicolet. “The competition is very close. During the session the lap times were getting quicker and quicker. I set a good time at the end event though I hit a fair bit of traffic at the middle of the session. The team gave me a good car today; it should be great for the race tomorrow.”

As in P1, the fight for the P2 championship is down to two teams: Conquest and Level 5 Motorsports. The Level 5 squad is in a similar position to Muscle Milk. If the No. 95 HPD ARX-03b of Scott Tucker, Christophe Bouchut and Luis Diaz finish 70 percent of the P2-winning distance then Tucker and Bouchut win the driver’s title for the second straight year.

The No. 055 Level 5 HPD can factor in as well. Marino Franchitti qualified the car third in P2 at 1:12.236 (126.585 mph). He will drive with older brother Dario and Tucker as well. So as in the bigger prototype class, the pole-sitting car’s lone objective is to win the race and not impact the ALMS title fight.

“I love racing in America, it is my third time here,” Pla said. “It is very different than what we do in Europe. Tomorrow the competition will be very tough, it will be good for sure.”

Kyle Marcelli won the Prototype Challenge pole position despite a brief scare in Merchant Services’ No. 8 ORECA FLM09. The young Canadian posted a class-record lap of 1:14.099 (123.402 mph) and outpaced CORE autosport’s Colin Braun in the No. 05 ORECA by 0.046 seconds.

After Marcelli’s quickest lap, the Merchant Services car lost power between on the following lap. It ground to a halt near Turn 6 and brought out a red flag to stop the session with Braun on a flying lap.

“It was interesting,” said a relieved Marcelli, who will drive with Chapman Ducote and Matt Downs. “We were all going faster and faster each lap. I went into turn 5 and my team manager made it clear to put it in a clear spot. Then I noticed our engine breaker had popped, so I popped it back in and it fired right up and brought it back in.”

Marcelli gained a little bit of revenge over Braun after the CORE pilot won pole position in the last round at VIR by just 0.001 seconds.

“It's always a close and fun race in the PC category,” Marcelli said. “This year is the toughest season so far. Each team has very experienced drivers. I'm confident you'll see a close race tomorrow.”

MacNeil clinched the GTC driver’s title in the last round at VIR, and Keen is second heading into Saturday’s race.

“For the last couple of races we've been working on the race setup for the race,” Keen said. “So we always focused on getting the championship. This weekend we went all out - make the car fast and go for the win.”

“For sure, the endurance races are hectic,” Keen said. “I went out first for night practice, and it was pretty messy. The race is always more calm in the dark than practice is. Running with the prototypes here at night is always fun, but that’s part of being a GT racer. It's going to be a good time.”

“Of course we are very pleased for our team to be at Petit Le Mans,” Armindo said. “This is my first time at the track and it is very hard to learn and not so easy. We do not have many spare parts so we cannot crash our car. So far no scratches!”