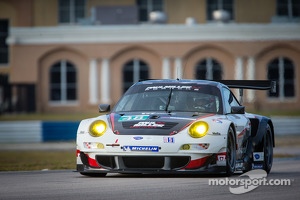 Lietz debuted with Paul Miller Racing in the 2012 Petit Le Mans and will make his second consecutive start with the team alongside Miller and fellow works driver Holzer in two weeks in the season-opening 61st Mobil 1 Twelve Hours of Sebring Fueled by “Fresh from Florida,” March 13 – 16, at Sebring International Raceway.

“I am very happy because Petit Le Mans was the first race together with Paul Miller Racing for me and it was very family and a lot of fun but also a strong and competitive team,” Lietz said. “A 12-hour race is always a ‘last-man standing’ scenario, who survives the best, and I think the car, the 997, is a proven car that should be technically fine. It is a very solid car, and if we are able to stay on the lead lap we can fight at the end. Normally, if you survive good, you can finish on the podium. I think this is the goal that we have and, especially with our new partner Michelin, I think it is possible.”

Bryce Miller, entering his third consecutive full season of ALMS competition, is looking forward to running the Sebring opener and the year’s other long distance races with his pair of works Porsche driver teammates.

“I have driven with Richard before, I have driven with Marco before, they are both world-class drivers and it is just a real privilege to be in their company,” Bryce Miller said. “To have a support base like that around you is obviously very important but they are also both really great guys, easy to work with, easy to get along with, and that may be every bit as important. It keeps the chemistry in the team good, positive and confident.”

Paul Miller Racing recently completed a productive two-day test in its No. 48 Chopard/TOTAL Porsche along with about a dozen other ALMS competitors last week at the legendary Sebring circuit. Miller and Holzer co-drove the Porsche over the two days.

“We tried some changes and found time in the car in nearly every set of changes that we explored,” Miller said. “We have made some gains and are learning more about the car so it is very exciting. Our level of opportunity is entirely different this year. I am really excited about the momentum that we have going in our team. It really synchronizes well with the timing of this opportunity and I think the team is ready to take the step with the Michelin. I have really been enjoying the tire from a driver’s standpoint.”