The Tequila Patrón American Le Mans Series at Long Beach is the second round of the 10-race ALMS championship. 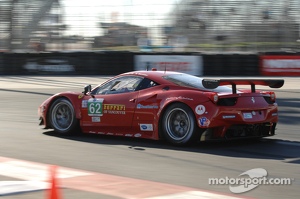 Olivier Beretta, driving the No.62 Risi Competizione Ferrari 458 Italia, set a time of 1:19.184 which put him in 7th place on the super-tight GT grid – a mark of how competitive the manufacturer-led class continues to be.

Pole position was taken by Dominik Farnbacher in the No.91 SRT Motorsports Viper GTS-R with a time of 1:18.845.

In a condensed day of running for round two of the American Le Mans Series, with just two hours of practice in the morning and a 15 minute qualifying session this afternoon, the Houston-based team has had a trouble-free day but lacked the straight line top speed necessary to challenge for pole position.

Two-time Long Beach class winner, Olivier Beretta, said afterwards: “The car is really good and I have no complaints; the team did a really good job and I think I did my job too.

When you look at the lap times it’s super close but the problem is once again the balance of performance – the Vipers are too fast on the straight line.

For sure we’ll be there in the race as the team is good on pit stops and everyone’s used to these short races. Like every race we need a bit of luck, but I’m confident for tomorrow.”

Half of this morning’s practice was given over to Long Beach debutant, Matteo Malucelli, in order for him to learn the track. The Italian proved to be a quick study as it took him just ten laps to get up to speed and the Risi Ferrari ended the session in third place after finding a good race set up.

The two drivers, together with engineer Rick Mayer, have worked specifically on handling and balance through the 11 turn plus efficient braking – key elements for a successful result on this tight course between the concrete barriers.

The Tequila Patrón American Le Mans Series at Long Beach is the second round of the 10-race ALMS championship. ABC’s coverage begins at 1 p.m. ET on Sunday, April 21, and live coverage is available on ESPN3 starting at 7:15 p.m. ET on Saturday, April 20. In Europe, coverage will be on Motors TV or via live streaming on alms.com.

WeatherTech Porsche on Pole in GTC at Long Beach