Another step has been taken to clarify the long-awaited rules for the 24 Hours of Le Mans and its associated series in 2011. The focus was on regulations for hybrid entries, which will be brought into compliance with fuel-powered cars by limiting ...

Another step has been taken to clarify the long-awaited rules for the 24 Hours of Le Mans and its associated series in 2011. The focus was on regulations for hybrid entries, which will be brought into compliance with fuel-powered cars by limiting the capacity of the electric output and storage, reducing the fuel tank size to account for dual motive power and limiting the motivation to front-wheel or rear-wheel drive. 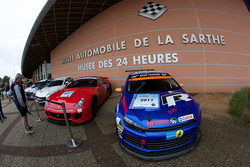 The emphasis of the discussions has been on hybrids in the LMP1 category, where Peugeot has expressed its ambitions to compete after this year's conclusion of the diesel-powered 908 program. Even though the Porsche 911 GT3 R Hybrid has already competed effectively in the 24-hour race for GT cars at the Nuburgring in May, discussions remain about including hybrids in the category.

"Sometimes you have to run outside the classification," said Hartmut Kristen when asked about the GT3 R Hybrid's future prospects. The new regulations for the single GT Endurance class focus on production engines and cost reduction. The latter aspect makes the GT3 R Hybrid politically sensitive at a time when the Automobile Club de l'Ouest, the rule-making authority, is trying to convince manufacturers to accept cost containment.

Ironically, the Porsche GT3 R Hybrid is expected to appear first in an ACO-associated event. The car will compete at the Petit Le Mans in October as a non-classified participant, according to Dr. Wolfgang Durheimer, the director of research at Porsche AG.

Bruno Famin, the technical chief of Peugeot Sport, said an LMP1 hybrid option will be examined closely after the team built and publicly introduced a test mule two years ago. "We would like very much to build the hybrid LMP1 car," he said. "There is a plumbing problem. We just got the rules today."

"It's very complicated and there are some unknown problems," continued Famin. "We will have to approach it step-by-step. The only thing we know is that we will have problems we have not had before."

The LMP1 hybrids will be allowed to collect electric charges from either the front or rear of the car, but the motive power for both the fuel engine and electric charge must be made at the same location. The limit for peak power will be 500 kilojoules. The storage can be battery or mechanical, i.e. the flywheel technology introduced by Williams Grand Prix Engineering. But details of the issues such as weight, fuel engine output and capacity for the electrical storage will not be announced until later.

The emphasis will be on sustainable technology development between 2011 and 2013. Previously, the ACO announced a reduction in engine displacement capacity and power for all the different fuel categories. Over-all the idea of evolution in reductions in emissions, noise and fuel consumption will be emphasized. "Endurance racing is the vanguard," said Pierre Fillon, director of the rules committee. That committee includes special advisors' Denis Chevrier and Bernard Dudot, veterans of Renault's F1 participation.

The ACO is reserving a starting position for a 56th car next year for unique machines that fit the long-term criteria, possibly an all-electric prototype under development by Yves Courage. That could also become an avenue of entry for the Porsche GT3 R Hybrid.

The current cars will be grandfathered for next year in both LMP and in the new GT Endurance category, which will be comprised of current GT2 entries. The rulebook eliminates the FIA's GT1 class, because of the lack of entries and conflicts with the FIA GT1 World Championship schedule.

The GT category will have two segments; one reserved for drivers designated as bronze or silver level, otherwise known as "gentlemen drivers." It will not allow the current practice of pairing the "gentlemen" with professionals.

The allowance of only production engines is expected to reduce costs considerably and teams will be required to use the same engine for 30 hours of track time in 2011 and a minimum of 50 hours by 2013.

The prospect of factory withdrawals due to budget constraints was dismissed by Vincent Beausmesnil, directly charged with rules development. He suggested that Nissan and Ford may both join the GT Endurance category by next year, when an entry from South Africa is also expected to apply for entry at Le Mans.