Atlanta, Ga. — Scott Tucker and Level 5 Motorsports rounded off a superb season of racing at the 2012 American Le Mans Series finale, Petit Le Mans, by securing a multitude of victories, accolades and, most importantly, the P2 Drivers and Team Championship titles. It is the team’s second P2 Championship and third ALMS title and they recorded eight P2 class victories from ten races, including an overall 1-2 finish at the Baltimore Grand Prix. It was Level 5’s sixth consecutive win in ALMS endurance races and was as hard-fought as any that have gone by, with a dramatic finish to add to the tension. 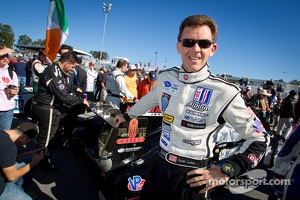 After an exciting on-track battle in the augmented P2 category for this 1000 mile event, which went down to the wire, Tucker, Christophe Bouchut and Luis Diaz took the checkers first in class and second overall in the No. 95 Level 5 HPD ARX 03b and were thrilled to be joined on the podium by Dario and Marino Franchitti, Tucker’s teammates in the No. 055 car. The Franchitti brothers and Tucker battled their way to second in class and third on the overall podium with Marino Franchitti setting the race's fastest P2 lap en route to the impressive finish. The No. 055 also won the ALMS Green Challenge which rewards high performance on the race circuit, energy efficiency, and the smallest environmental impact.

It hadn’t been a 100 percent straight-forward race for either car but they dealt with close and competitive racing, seven full course caution periods and two penalties during the 9 hour 37.42 minute race. Tucker and Christophe Bouchut had to complete just 70 percent of the race distance to be crowned Drivers’ Champions and, appropriately, Scott Tucker was behind the wheel when he learned the news.

The Kansas-resident, who was also crowned L2 Champion in the Cooper Tires IMSA Lites series Friday, completed an incredible six and a half hours of driving – something not repeated by anyone else in the field – in the two Level 5 HPDs and was behind the wheel of the No. 055 as the laps ticked to the minimum 277 needed to secure the win. “They told me on the radio that we’d won the Championship but I was really focussed on my stint in the No. 55 because we were trying to win the race. I said ‘Yay’ and then I went back to work!

“The target of winning the championship is the whole reason we do this. We’re not just here to go out and play around at the weekends, we have a purpose. For Level 5 Motorsports, this will be my 9th Drivers Championship and our 10th Team Championship and we’re building a legacy.”

Tucker also paid tribute to the team’s close rivals throughout the 2012 season, Conquest Endurance. “Conquest were real good competition and they were tough. I’m glad we were racing against them as they really brought the game up. We fought hard every race and they brought a good team to the table."

Tucker’s co-champion, Christophe Bouchut, had enjoyed a low-key and very steady weekend, with the championship always in mind. The Frenchman said: “I’m delighted to win the Championship; it’s a wonderful feeling to win for the second year in a row in LMP2 and especially with what we did today to win the race in P2. It was a tough season and we had to fight really hard. Here our target was really 70 percent and only after that to fight for the win and that’s exactly what we did. I’m really proud because the season was hard and many times it looked like we’d miss an opportunity to win but each time we caught it and now we’re champions again.”

Also enjoying today’s victory was regular Level 5 Motorsports driver, Luis Diaz. The popular Mexican driver put in a superb turn behind the wheel to make up lost ground and brought the car home to the finish in front of the cheering team. “I was so focussed while in the car and trying not to think about the win. I just wanted to drive every lap as hard as I could and the guys did a great job on the pit stops. We were pushing and pushing Conquest and I think they had some contact and got a flat tire. We did what we had to do and I’m really happy for the guys on the team. At one point I think we were three laps behind so winning this very tough race is very special.”

Dario Franchitti was on the edge of his seat throughout the final 40 minutes of the race, watching his younger brother claw back time lost to an earlier penalty. The IZOD IndyCar Series star did a triple stint in the No. 055 car during the afternoon, earning accolades from the team but tempered slightly by a penalty for a brief tangle with a slower car. Soon forgotten by all, however, the Scot had a grin from ear to ear as he watched Marino take the checkered flag: “The whole race has been massive fun and it’s good that the guys got both cars on the podium; it was fitting for the effort and it was an exciting race there. Even after my penalty we were in contention and then, after the second long penalty we were awarded [for improper wave by and passing under yellows], Marino drove the wheels off it coming back through.

“I loved working with Marino, Scott and all the Level 5 guys, but I have to say I’m so impressed by my little brother! I’ve had a lot of good team mates in my time but he’s taught me a few things this weekend. It’s the only time I’ve finished the race here at Road Atlanta and it’s very satisfying to be on the podium. Winning at Daytona is one thing but here it’s all about the traffic and managing it and I got it right 99 percent of the time and made one mistake but I loved it all.

Driving his socks off for the final 40 minutes was a very happy Marino Franchitti, returning to Level 5 for the second year in a row. One of the highlights for both Franchitti brothers was the (rare) chance for them to drive with each other but Marino more than matched his esteemed older brother today. He commented afterwards: “It was a lot of fun. It’s obviously frustrating when you have a car capable of battling for the win and things outside of your control and the team’s control take it away from you. I’m very proud of the Level 5 team though, my team mates Dario and Scott, and the crew did a great job at every stop. We maximised what we had and did our best with what we had and every lap we were pushing.

“We had an issue with the car from the beginning and we’re not sure what it was yet but it was a handful and it got worse as the race went on. It feels very satisfying to get the result because we earned it and we had to overcome all those problems. To get on the podium with my big brother and Scott is just fantastic. Congratulations to Scott and Christophe and Luis for winning the race and for the Championship. What a weekend for Level 5! It’s good to be a part of it.”

A very satisfied Team Manager, David Stone, summed up the day on behalf of the whole team: “Before coming here this was the finish we dreamed of, but you never like to take anything for granted. We tested real hard here a few weeks ago and hopefully some of that paid off. Everyone on the team worked really hard and did a great job, and the drivers all performed as they should have and stayed out of trouble on the track. The Honda chassis and engine both did their jobs perfectly and we had no hiccups all day. I learned just a while ago this was the 50th win for this chassis and also that when Dario ran the car in 2007 it was with the first win for the Honda so it was great to have him here for this one too. I’m sure Scott’s quite excited with the result as the whole team is.”