Going from the longest race of the season to the briefest, and the second-longest track on the schedule to the second-shortest, the American Le Mans Series presented by Tequila Patron undergoes an interesting transformation from Round One to Round Two. Though the characteristics of the race and the track are pointedly different, many of the podium contenders remain the same for Saturday's Tequila Patron American Le Mans Series at Long Beach. 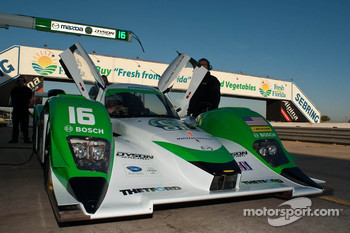 Exiting the season opener, Dyson Racing leads the LMP1 standings after finishing sixth with its Lola-Mazda, the highest finish of all full-season ALMS entries. Drivers Chris Dyson and Guy Smith will square off against the Muscle Milk Aston Martin Racing Lola-Aston Martin. Last year, campaigning a Porsche RS Spyder, Muscle Milk's Greg Picket and Klaus Graf were able to edge out Dyson and Smith for the last podium spot at Long Beach. This year, the Muscle Milk squad needs to overcome a 30-point deficit in the points after registering a DNF at Sebring. For this reason, Pickett is handing over his driving duties this weekend to four-time ALMS Champion Lucas Luhr, who dominated the Long Beach race in 2008 with Audi Sport.

In LMP2, Scott Tucker's Level 5 Motorsports team has entered two Lola-Hondas in the category, with Tucker listed as a driver for each. The 2010 LMPC Champion will pair with Christophe Bouchut in the No. 33 closed-top car and with Sebring LMP2 winner Luis Diaz in the No. 055 machine -- an open-top entry.

All eyes will no doubt be on GT, which is embarking on one of its most competitive seasons yet. All the main protagonists hit trouble at Sebring. Defending champion Patrick Long's Flying Lizard Porsche 911 GT3 RSR tangled with the Corvette C6.R of Corvette Racing's Jan Magnussen in Turn 17, but the Extreme Speed Motorsports Ferrari F458 Italia driven by Johannes van Overbeek got the worst of it, making impact with the tire wall. Even eventual winner BMW Team RLL had to pit for a flat tire on the No. 56 BMW M3 GT a mere 20 minutes into the race. It was most definitely a foreshadowing of the season ahead; a GT race win will go to those that make the fewest mistakes.

Though Joey Hand has already won the 24 Hours of Daytona and 12 Hours of Sebring this year, he has indicated in previous interviews that a win at Long Beach would mean more to him than any other race. He'll have stiff competition from Flying Lizard, however, which is the only team to win back-to-back races at Long Beach with drivers Long and J0x39f2g Bergmeister. Corvette Racing showed at Sebring that it is poised for a comeback this season, and drivers Oliver Gavin and Olivier Beretta are the only other drivers besides Long and Bergmeister on the entry list with two Long Beach victories. With the trouble that beset both ESM Ferraris at Sebring, the No. 01 and No. 02 remain a wild card for Long Beach. 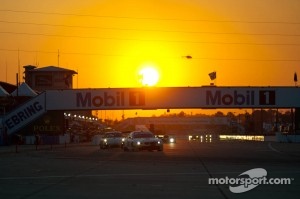 Gunnar Jeannette and Elton Julian both have a shot at becoming the first repeat LMPC winners at Long Beach. Last year in the category's debut season, Jeannette and Julian claimed victory on the streets of Long Beach as teammates for Green Earth Team Gunnar. This year the two will be in direct competition - Jeannette driving for CORE autosport and Julian behind the wheel at Genoa Racing. Together, Genoa Racing and CORE autosport cars filled the top four spots at Sebring.

Though Alex Job Racing has a strong lineup in Bill Sweedler and Leh Keen to defend its 2010 Long Beach victory, it's hard to bet against the bevy of locals in the class including GMG Racing's Bret Curtis (Lake Sherwood) and James Sofronas (Newport Beach), plus TRG's Duncan Ende (Los Angeles) and Mangus Racing's Craig Stanton (Long Beach). Stanton lives so close to the Long Beach circuit that he plans to bike in every morning.

The Tequila Patron American Le Mans Series at Long Beach begins with practice at 7:15 a.m. (PT) on Friday, April 15. Qualifying, broadcast live on ESPN3.com, will take place later on Friday, at 5:05 p.m. (PT). Round Two of the 2011 American Le Mans Series presented by Tequila Patron will go live on ESPN3.com at 4:15 p.m. (PT). Fans outside the U.S. can access live broadcasts through americanlemans.com, which also offers live timing and scoring throughout the weekend. The race will air on ESPN2 on Sunday, April 17, at 5 p.m. (ET). Visit the americanlemans.com schedule page for information on tickets and accommodations.