Andre Lotterer kept Audi out front in practice for the 60th Anniversary Mobil 1 Twelve Hours of Sebring Fueled by Fresh from Florida on Thursday afternoon. The reigning Le Mans 24 Hours winner set a lap of 1:47.761 in the Audi R18 he shares with Benoit Treluyer and Marcel Fassler for a 0.478-second gap back to Timo Bernhard in the second of the three Audis. 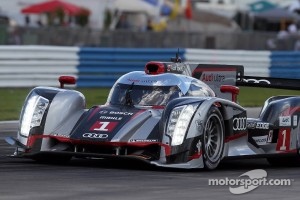 The German manufacturer is looking for its first Sebring victory since 2009. It will compete among a 64-car grid that marks the opening of the American Le Mans Series presented by Tequila Patrón and the FIA World Endurance Championship.

Muscle Milk Pickett Racing’s Klaus Graf was the top ALMS runner with a lap of 1:49.921.

Ryan Hunter-Reay was the quickest driver in P2 with a 1:53.094 in one of Level 5 Motorsports’ two HPD ARX-03b prototypes. He was 0.322 seconds clear of teammate Christophe Bouchut and another 0.065 seconds ahead of Conquest Racing’s Martin Plowman in the team’s Morgan-Judd.

In Prototype Challenge, Pablo Sanchez set the best lap of the session for Merchant Services Racing at 1:55.573. Raphael Matos was second for Performance Tech Motorsports at 1:56.000.

Pedro Lamy, a podium finisher the last two years at Sebring with Peugeot, led GTE Am in a Larbre Racing Corvette C6.R. His lap of 2:02.747 placed him nearly a second quicker than Dominik Farnbacher in a Ferrari F458 Italia from Luxury Racing.

The next practice at Sebring is set for 7:35 p.m. ET – an extended night session.