Romain Dumas got Audi Sport Team Joest started on the right foot in official practice for the 60tth Anniversary Mobil 1 Twelve Hours of Sebring Fueled by Fresh from Florida. The Frenchman set the fastest time in Thursday’s one-hour session with a lap of 1:48.626 in his Audi R18. 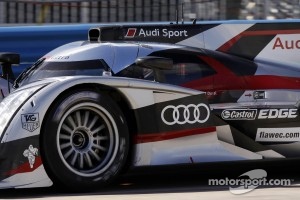 Audi enters Sebring seeking its first victory in America’s greatest sports car race since 2009. Winning would be double-special as the 12 Hours serves as the opening round of both the American Le Mans Series presented by Tequila Patrón and the FIA World Endurance Championship.

Dumas’ Audi was 1.136 seconds clear of Klaus Graf in Muscle Milk Pickett Racing’s HPD ARX-03a. The quickest of the ALMS regulars had a 0.351-second advantage over the Audi of Marcel Fassler.

ALMS teams held the top two spots in GT with Oliver Gavin’s Corvette C6.R setting the fastest lap at 2:01.154. The Corvette Racing veteran was just 0.009 seconds ahead of BMW Team RLL newcomer Jonathan Summerton in his BMW M3 GT. Toni Vilander sat third for AF Corse with a lap of 2:01.610 in his Ferrari F430 GT.

Muscle Milk Pickett Racing’s Memo Gidley was the fastest driver in Prototype Challenge after a lap of 1:55.881 in the team’s ORECA FLM09. Alex Popow had the second-fastest lap at 1:56.018 in CORE autosport’s prototype; he was about 0.7 seconds ahead of Performance Tech’s Ricardo Vera.

Dominik Farnbacher set the pace in GTE Am. His lap of 2:02.988 in Luxury Racing’s Ferrari F430 GT was good enough for a 0.524-second gap back to Paolo Ruberti in Team Felbermayr Proton’s Porsche 911 GT3 RSR.