Audi answered back Tuesday with the two quickest times in testing for the 59th Mobil 1 Twelve Hours of Sebring presented by Fresh from Florida. Audi Sport Team Joest’s R15 prototype driven by Timo Bernhard, Romain Dumas and Mike Rockenfeller posted a 1:48.450 (122.822 mph) lap in the morning session, more than a second better than the closest challenge from Peugeot. The two diesel powers are set to renew their rivalry Saturday in the opening round of the American Le Mans Series presented by Tequila Patrón and the Intercontinental Le Mans Cup. 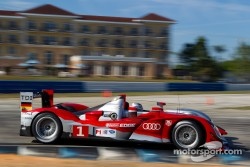 Neither team went quicker than Monday’s 1:49.615 (121.516 mph) lap set by the Peugeot 908 of Franck Montagny, Pedro Lamy and Stephane Sarrazin. But the No. 1 Audi put its stamp with the quickest time in both Tuesday sessions. The Montagny/Lamy/Sarrazin Peugeot was second Tuesday at 1:49.506 (121.637 mph) with the sister car of defending race-winners Anthony Davidson, Marc Gene and Alexander Wurz 0.063 seconds back in third.


Both the Peugeots set their quickest laps in the afternoon.

The GT category remained incredibly tight with the top seven cars separated by 0.418 seconds and the top nine within a single second. AF Corse’s Ferrari F430 GT of Gianmaria Bruni, Pierre Kaffer and Giancarlo Fisichella led the way with a lap of 2:01.873 (109.294 mph) in the afternoon, just 0.17 seconds clear of Corvette Racing’s Corvette C6.R of Oliver Gavin, Jan Magnussen and Richard Westbrook; their car set its fastest lap in the morning. 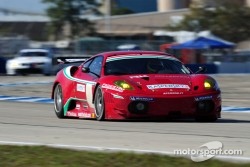 BMW Motorsport’s trio of Bill Auberlen, Augusto Farfus and Dirk Werner had the third fastest lap at 2:02.65 (109.122 mph) with their BMW M3 GT; its best time came in the morning as well.

Level 5’s second entry – a Honda-powered Lola coupe – was third quickest in class with a lap of 1:58.294 (112.601 mph) in the afternoon. Tucker, Christophe Bouchut and Joao Barbosa are sharing the ILMC entry.

All three of the class’ fastest times were in the morning session. 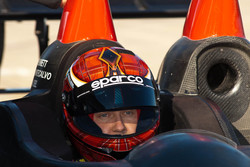 The first official practice session for America’s greatest sports car race is set for 10:15 a.m. ET on Thursday. Live timing and scoring is available at americanlemans.com

The 59th Mobil 1 Twelve Hours of Sebring presented by Fresh from Florida is set for 10:30 a.m. ET on Saturday, March 19. The race will be shown live and in its entirety on ESPN3.com and americanlemans.com starting at 10:15 a.m. ET. ABC will provide coverage from 12:30 to 2 p.m. ET on Sunday, March 20. Visit the American Le Mans Series' schedule page for information on tickets and area accommodations.