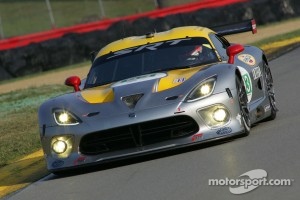 THE VIPER GTS-R IS BACK IN 2012
• Two identical SRT Viper GTS-R race cars will compete in this weekend’s American Le Mans Series event at the 4.048-mile Road America course.
• The driver lineup: Tommy Kendall and Mark Goossens in the No. 93 Pennzoil Ultra Viper and Dominik Farnbacher and Kuno Wittmer in the No. 91 Forza Motorsports Viper.
• This is the first on-track, factory-based participation for the SRT Viper GTS-R in the ALMS since 2000; will compete in the production-based GT class.
• Drivers Ryan Hunter-Reay and Jonathan Bomarito will fill the expanded driver slots for the extended-distance events.
• Following a limited schedule this season, the SRT Viper GTS-R team will compete full time in the ALMS series in 2013.

DRIVER QUOTES:
“I am really looking forward to the Road America debut of the Viper. We improved a few things on the car after Mid-Ohio. It will be a tough one; it is a four hour race. We will try to get back in the top 10 and finish without incidents. Due to the long straights and our smaller engine restrictor compared to the other cars, it will be hard to overtake cars on the very long straight. But I love RA and the fans will love the car.
--Dominik Farnbacher – No. 91 SRT Viper GTS-R

"I am very much looking forward to our race weekend at Road America. It is a circuit that I enjoy very much. The fact it’s a four-hour race makes it even more fun. The team has worked so hard since Mid-Ohio. I believe that with what we learned in Mid-Ohio, Dominik and I can start chipping away at that lap time, little by little."
--Kuno Wittmer – No. 93 SRT Viper GTS-R

“As a driver, I can’t wait to get back to historical Road America with the Viper. It’s obviously been a while since the Viper has been in competition but now that we’re back and proved the Viper’s reliability during the Mid-Ohio event, I think we’re ready for the next step. We will be trying to make the car a little bit more competitive. We’re constantly working on trying to understand what the car likes and what it doesn’t like. We’re still working on setup changes basically all the way through qualifying and up until the race. In all honesty, I’m looking forward to continuing that work that we did at Mid-Ohio, the work that we’ve been doing during the testing prior to the first race. I’m really looking forward to being at Road America again.”
--Marc Goossens – No. 93 SRT Viper GTS-R

VIPER NUGGET
• SRT Motorsports has partnered with Riley Technologies, based in Mooresville, N.C., on the design-and-build process of the new SRT Viper GTS-R race cars.

QUOTE OF THE WEEK
“As excited as I was to get to Mid-Ohio for our debut, I am looking forward to going to Road America even more! It is my favorite circuit in the world. The whole area has been special to me since I went there as a teenager to watch my dad race. I can't wait to hear the SRT Viper's V10's music bellowing through Thunder Alley! At Mid-Ohio, we accomplished our goal of having both SRT Viper GTS-Rs finish. That was ambitious since the longest the car had run at once prior was about 35 minutes. Even though both cars finished, it wasn't exactly smooth sailing. So, I would have to say a realistic goal is to have a "routine" run for both cars where we make the scheduled number of stops, driver changes, etc. and to extract a little more of the potential from the Viper GTS-R's potent chassis.”
--Tommy Kendall, No. 93 Pennzoil Ultra SRT Viper GTS-R 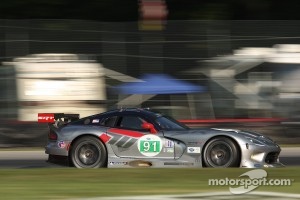 SRT MOTORSPORTS
“We’re coming off of a very good debut weekend at Mid-Ohio with just over a week to make some necessary changes to the Viper GTS-R. Focusing on driver-comfort improvements and pit-stop strategies, we should expect substantial gains in these areas. The cars were already very competitive in the handling and braking sections, so the SRT Motorsports team only tweaked these areas a bit and will only see modest advances this weekend. The long straights at Road America could be an issue as we are still working on reducing the drag in the car and improving engine output. Just having more track time with the car will provide additional input on the Viper’s reliability and durability. We already know the car is pretty tough – the 93 car took some abuse at the last race, ended up in the tire wall twice and was barely damaged. Overall, we’re looking for another good showing at Road America this weekend. The Viper fan support at Mid-Ohio was amazing. We hope to give them even more exciting racing this Saturday in Elkhart Lake.:
-- Gary Johnson, SRT Motorsports Road Racing Manager

FROM RILEY TECHNOLOGIES
“We need to build on how we started at Mid-Ohio. We need to make sure the reliability is there in preparation for the longer races, work on lap times and driver cooling. Probably the biggest prep work that we did between Mid-Ohio and now is on the driver cooling side. We worked with SRT engineers on some AC stuff and did a lot of work in-house.

“Obviously we need to start turning our attention to lap times and to see where we are performance-wise. At Mid-Ohio we were making sure that everything worked. At Road America, we’ll be working more toward lap times and getting toward the other end (front) of the field.”
-- Bill Riley, VP and Chief Engineer

Conquest looking to be the car to beat at Road America