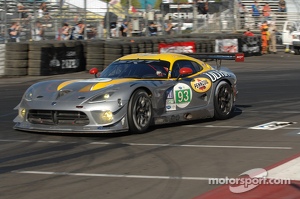 In addition to a full-time ALMS schedule in 2013 in the GT Class, SRT Motorsports has accepted an invitation for both cars to compete in the 24 Hours of Le Mans in June.

WHAT IS THE BIGGEST CHALLENGE TEAMS FACE AT LAGUNA SECA? “The challenge at Laguna Seca is finding a good balance on the race car. The race car really needs to do quite a few different things well. There are low speed corners where you’re really working on mechanical grip and getting the car to turn. You also have to find a nice, high-speed balance platform; you need balance in high-speed corners like Turn 4, Turn 9 and Turn 10.”

COMMENT ON THE ELEVATION CHANGES THERE. “Laguna Seca probably presents one of the biggest elevation changes of any race track that we go to, if not the biggest. You have the famous Corkscrew to deal with – you’re climbing and climbing up the hill to reach it and then it just falls away once you get to the top.

It’s a world famous corner. You’re dealing with a lot of natural elevation with the racetrack which makes it a lot of fun. It’s really nestled into this valley and these hills. It’s a beautiful place, good for the spectators. They can see a large portion of the track.”

DOES THE ELEVATION CHANGES PUT AN EXTRA PHYSICAL TOLL ON YOU AS A DRIVER GOING UPHILL AND DOWNHILL FOR FOUR HOURS? “It does. It’s a pretty physical track. Monterey has a very mild climate usually. It can get hot out there on occasion but most of the time, the weather is pretty nice in May. It should be pretty cool, so that’ll be nice for the drivers. It’s a four-hour race on a pretty high-grip, high-speed track which puts a lot of physical stress on the drivers.”

COMMENT ON THE BAD RACING LUCK THAT THE 93 TEAM HAS EXPERIENCED SO FAR THIS SEASON. “We can’t get frustrated with it because the guys are doing everything they can. Our luck, so far, has not been because of a lack of effort by the race team or driver performance.

I’m not frustrated. We’re ready for a turnaround on the 93 and I think Laguna Seca might be it for us. Everybody has done an awesome job and our pace has been there and there have been a lot of positives. Now, we just need to turn around our racing luck a little bit and we’re ready for a podium.”

WHY DO ALL DRIVERS SAY THEY WANT TO RACE AT LAGUNA SECA? “Laguna Seca is a great track. It’s one of those tracks that every driver wants to drive at and race at. It’s a fun track. I’ve driven there a lot in the past in some other forms of motorsports. I look forward to bringing the Vipers there. It’s just a fun track in general.

When you're racing with five or six other cars fighting for the lead, it’s really, really fun. It provides great passing opportunities. It’s not the quickest track in North America; it actually has a pretty short front straightaway. The speeds will be similar to Long Beach. Momentum is important. Now that we’re doing a four-hour race, it changes up the game a bit.”

WHAT IS SO SPECIAL ABOUT THE CORKSCREW SECTION OF THE TRACK? “The Corkscrew is definitely world renowned. Every driver around the world wants to, at least once in their life, go down the Corkscrew. It’s a pretty big drop and the best way I can describe it is once you approach it, hold your breath and open your eyes because it’s quite a drop.”

THE CORNERS AT LAGUNA SECA FALL AWAY FROM YOU. WHAT KIND OF A CHALLENGE IS THAT? HOW DO YOU OVERCOME ALL THAT? “The corners are very, very different than most other circuits across North America. One thing that is difficult, especially for a four-hour race, is keeping the track clear of the sand.

“The corners do fall off a lot but I think that we’re going to be pretty good with our Viper. We’re pretty confident that the car will hook up pretty well there. I remember 2009 when we set the production car record there with a Viper. So, the Viper has a pretty good track record at Laguna.”

WHAT ARE SOME OF THE CHALLENGES OF A FOUR-HOUR RACE DISTANCE? “You know, the four-hour distance it’s quite interesting and requires a different strategy. The Long Beach event was the shortest race on the schedule. A two-hour race on a street course is a door-banging sprint – start to finish, non-stop.

I’m not saying this four-hour race is a sprint but they are pretty much all green-flag, so it’s go and don’t look back. You don’t want to lose a tenth (of a second) to anybody in any corner because the competition is so fierce. The one way to attack this four-hour race is get a good qualifying position and keep the nose clean.”

Dominik Farnbacher – Driver, No. 91 Fast & Furious 6 SRT Viper GTS-R “If you lose momentum in the Corkscrew, you are definitely at a disadvantage. You don’t want to run in through the traffic before the corner, before it goes uphill because then you get overtaken by a lot of cars.”

HOW DIFFICULT IS IT TO PASS AT LAGUNA SECA? “There are two corners where you can actually overtake. One is the first corner where you have top speed and you have to brake down. You can really out-brake someone. And then the other corner is the one up to the Corkscrew because when you lose momentum there, as I said earlier, it’s the only way to pass up there. I think Turn 1 will be a big thing.”

YOU MUST BE EXCITED ABOUT THE WAY THINGS HAVE STARTED THIS SEASON. “I think we have good momentum for the season and also for the next race. We’ll go there with our heads raised. We know we can make it to another podium if we just work hard. We have the right recipe for it.

We just need to put it together, have the right strategy and no problems. We have a shot at another podium because the car is actually more competitive than ever before. We did our homework throughout the winter. Now, that’s paying off. We will have another strong, strong finish at Laguna Seca if everything works out well.”

“First of all, Laguna Seca is one of the classic racetracks in the U.S with a lot of history. Probably, together with Watkins Glen, it’s one of my favorites. When I first went to Laguna Seca after watching it on TV, I thought the track was actually quite a bit slower than what it looked like on TV. But it remains a challenge.

There are a couple of high-speed corners where you need to carry a lot of speed. They aren’t necessarily the fastest corners but still challenging. It’s important to have the right amount of downforce so that you can carry that momentum through the corners. The elevation changes and the famous Corkscrew make it a very interesting track.”

BILL RILEY MENTIONED EARLIER THIS WEEK THAT THE CORNERS FALL AWAY FROM YOU AT LAGUNA SECA. WHAT DOES THAT MEAN FOR A DRIVER AND HOW DO YOU COMPENSATE FOR THAT? “It’s the nature of the track. It falls away in different areas. They’re kind of off camber. It’s basically the opposite of being banked into a corner like you have in NASCAR.

With the speed carried into an off-camber corner, you actually get tracked away from the apex of the corner. It requires a different driving technique. At this level, everybody is so professional, every driver knows about it and anticipates the problem and the nature of the track.

“Basically we try to set up the car to make the handling of the car better when it goes through that corner. There are elevation changes not only in the Corkscrew but sometimes in the center of the corner where the track drops away. It’s obviously harder to find the right grip level at that point. That’s one of the things that we are certainly looking at when it comes to communication between the driver and engineer. We want to have an optimum setup for that type of corner.”

WHERE DO YOU PASS AT LAGUNA SECA? “If you go well through the Corkscrew, you can put yourself in position to overtake somebody. As you go up the hill approaching the corner, everybody knows that it is an out-braking area. If they close the door on you a little bit, it’s harder to get in between the other car and the side of the track. I think there are other areas. For instance, the final turn – it’s very easy if somebody makes a mistake coming out of the Corkscrew going around that hill thru the lefthander and the next one.

If you can put pressure on people there, they might get a little nervous and you can get in a good position to out-brake them. People always look at the end of straightaways and the braking zones as good opportunities to overtake someone. With the professionalism in the series, as soon as somebody makes his car a little bit wider, it becomes very tough in that area to overtake.

“It’s all about strategy in endurance racing. I think we’ve proven that our team has good strategy. We had good pit stops at Long Beach. Keeping your nose clean can take you a long way.”

COMMENT ON THE FOUR-HOUR RACE DISTANCE. “It’s probably going to end up being a two-stop race, possibly three. If there’s a long full-course yellow, you obviously want to optimize the opportunity and do an extra pit stop, make sure that you get to the end on fuel and you’re on the right tires. It’s important to make sure the drivers stay fit in the car and take it to the best possible finish.

“We’ll focus on pit stops, tires and fuel consumption strategies when we get there. We had a very good strategy at Long Beach. I think we have to learn as much as we can through the test sessions to shine in the race.”

Tucker and Level 5 looking to bounce back in Monterey