Gary Johnson: "I think if this race was three hours long, we might have had a win." 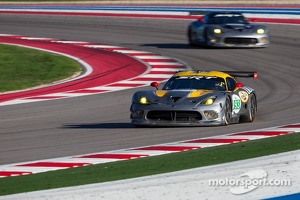 It’s a testament to how close the GT category is. No cautions in a two hour and 45 minute race and it comes down right to the end.

What an amazing job by the whole SRT crew. Our SRT Viper GTS-R was awesome. Thank you Kuno (Wittmer), amazing job and good pit stops by the crew. I’m tired but we’re happy.

"What an amazing run by this team. The car was fast all day. To make up 17 seconds in one hour and nearly pull off a win is just amazing. Everybody on this team is amazing. The crew did and incredible job in the pits. Great pit stops all day. We fought all day. The Viper was fantastic. For us to be that fast at the end is just awesome."

Kuno Wittmer – No. 93 Pennzoil Ultra Viper GTS-R (Finished Second): “The day was up and down for me. Jonathan did an amazing job today. He had a great race start. When he came in to pit he gave me a great car. We opted for a different strategy on tires. We had a great pit stop.

The team was amazing. They nailed their marks and did an incredible job. Tire selection was a little tricky and when Jonathan went in for his last stint, the car was amazing. He knew what tires we needed and he brought it back to the front and a second-place finish.”

Marc Goossens – No. 91 SRT Viper GTS-R (Finished Fifth): “We drove as hard as we could and that was as much as we could get out of it today. It’s a top five and our teammates finished second. That’ a good day. The No. 91 was a handful to drive. I ran my own pace and made sure we brought the car home safely.

I didn’t have radio contact with the crew. My teammate (Dominik Farnbacher) came out with a pit board to let me know where we were running. That’s a great teammate. We got all we could out of the car today and will take it back and diagnose the problem.”

Dominik Farnbacher – No. 91 SRT Viper GTS-R (Finished Fifth): “It was a great team effort today with two cars in the top five. Maybe we didn’t have the best car today but we had no on-track issues and the car is clean. There was a big difference between our two cars today, so we’ll go back to the shop and the team will go over the No. 91 and see what the problem might be.

“We are one team. We do what we need to do as a team to win. The SRT Viper GTS-Rs came away with top-five finishes today. Not a bad day.”

Gary Johnson – SRT Motorsports Racing Manager: “Obviously a great finish to a weekend where we struggled a little bit. I think if this race was three hours long, we might have had a win. We had made a tire choice on the No. 93 that was probably not correct when Kuno (Wittmer) got in the car for his stint.

He obviously struggled with that setup. We feel bad for him but when we went back to the original tire compound and Jonathan went back in the car, the car was awesome. Jonathan did everything he could to get it to the front and with just a few more minutes, he could have done it.

“The team did a great job, never gave up. Hats off to Matt (Bejnarowicz) and Bill (Riley) calling the race. They did a fantastic job.”

Bill Riley – Vice President and Chief Engineer, Riley Technologies: “It was a great run by the SRT Viper GTS-Rs today for sure. The benefit of running two cars is that you can try two different setups. Matt's (Bejnarowicz, lead engineer) crew worked on a different setup than the 91 car and it worked today.

Kuno (Wittmer) and Jonathan (Bomarito) both drove great races. Kuno drove the middle stint and tried some things that didn't work out so when Jonathan got back in, they had it all tuned up for him. He was lightning fast and almost won the race."

Matt Bejnarowicz – Lead Engineer, SRT Motorsports: “We put JB (Jonathan Bomarito) back in and told him to dig deep and give it everything he had. We were 20 seconds down from the leaders at the time, and figured the only chance we had to get back would have been a yellow flag.

Jonathan kept going faster and faster, lap by lap and was able to track down the leaders. The way he managed traffic was amazing and when the two leaders were duking it out – we were able to capitalize on the opportunity.

“If you would have told me before the race that we would have been able to do that, I would not have believed you. I know the cars were good, but that was all Jonathan Bomarito. In this type of racing, you need a really smart racer who knows when to let a faster prototype go by when necessary, and when to pass a slower car so it doesn’t mess with his momentum, and today Jonathan proved to be a master of that.

“The weekend turned out to be a real challenge for us, even after our test day here on Tuesday. The conditions obviously changed a lot yesterday for qualifying and the setup we put on the cars today for the race was a bit of a leap of faith, but it worked out pretty well for both cars."

In a uneventful race, Dyson Racing is second at COTA