Dalziel is the latest addition to the two-car SRT Motorsports team that includes Tommy Kendall, Marc Goossens, Kuno Wittmer, Dominik Farnbacher and Jonathan Bomarito. All six drivers will be participating in the ALMS open test session today and Friday at Sebring (Fla.) Int’l Raceway in preparation for the season opening 12 Hours of Sebring on March 16 at the 3.7-mile road course.

“Ryan Dalziel is an excellent addition to our SRT Motorsports team,” said Beth Paretta, Director of Marketing and Operations – SRT Brand and Motorsports, Chrysler Group LLC. “He’s an accomplished racer and his intensity complements the enthusiasm of our team. Now, we turn our focus to final preparation of our Viper GTS-Rs for a full ALMS schedule and the 24 Hours of Le Mans.”

I truly believe that the car is going to win races this year.

Dalziel replaces Ryan Hunter-Reay who has other commitments this season.

“We’re elated we had a chance to interview Ryan and provide insight about our approach to the racing program,” said SRT Motorsports Racing Manager Gary Johnson. “We knew immediately that he was going to fit right in with the team. He compliments our driver’s racing savvy, their commitment to succeed. Ryan has been very successful on the track. I’ve had the opportunity to see him win in all the key races that we’ll be competing in this season. He’s the right piece of the puzzle we were seeking.”

Dalziel, a native Scotsman, has been racing sports cars since 2005. Among his career victories are the Rolex 24 at Daytona, the 24 Hours of Le Mans, the 12 Hours of Sebring and Petit Le Mans at Road Atlanta. Most of his success has come in prototypes.

“A lot of my decision to join SRT Motorsports was based around how much solid progress was made by the team last year,” he said. “I truly believe that the car is going to win races this year. Hopefully, it’s the one I’m in. It’s a very good project with great people behind it. I have no doubt that it’s going to be a successful program.”

Dalziel was immediately attracted to the “family atmosphere” of the SRT Motorsports team. 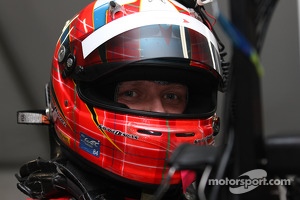 “For me, one of the most important things and probably one of the things that stood out when I met with the good people at SRT was, it is run almost like a family,” Dalziel said. “I think the best success that you can get in business and in racing is having a family relationship. I’m very much looking forward to it.

“I already know a lot of the people involved in the program and I’m looking forward to getting to know the people that I don’t know. I know a lot of people from Riley Technologies and have worked with Bill Riley for many years. The core group, along with Riley Technology and SRT, is a recipe for success. I can’t wait to get aboard and have a successful year.

“To me, chemistry, relationships and personalities are the most important thing. I don’t think SRT Motorsports would have picked me if they didn’t think I was going to gel and vice-versa. For me, I didn’t need proof that the car was going to be fast; I know the car is going to be good. I just want to make sure that we all get along. To me, being involved in racing as long as I have, having good relationships and good chemistry is 90 percent of the battle. The other 10 percent, you know, is a lot of the stuff that we can’t control.”

SRT Motorsports teamed with Riley Technologies, based in Mooresville, N.C., on the design-and- build process of the SRT Viper GTS-R. Two identically prepared cars will compete in the GT Class in the American Le Mans Series presented by Tequila Patrón.

The detailed driver lineup for each Viper GTS-R will be announced prior to the 12 Hours of Sebring.

The Viper’s successful racing heritage began in 1996 with its first racing entry, the original GTS-R, which earned five international GT championships and the 1997 to 1999 FIA GT championships in addition to the three consecutive one-two finishes at the 24 Hours of Le Mans in the GTS class.