AUBURN HILLS, Mich. (Oct. 14, 2012) – The 2013 SRT Viper GTS-R competing in the American Le Mans Series went from sketches on a drawing board to roaring around a racetrack in just a few short months during this calendar year. 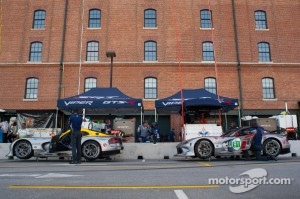 The successful debut of the car can be traced back to the reliability of the SRT Motorsports hardware, teamwork from the drivers and personnel at Riley Technologies plus a bit of time – perhaps the most crucial element of all – to bring everything together.

“We’ve had good reliability out of the Vipers,” said Bill Riley, the owner of Riley Technologies. “The team is working well together, the team is gelling. It’s a good group to work with all the way down. We all enjoy each other’s company. We have a great group of people, great drivers. I think it’s just time getting everything to gel and start working correctly.

“Everything is starting to work really smooth at the shop and now we just need to transfer that to having smooth weekends. When we do start running up front, it’s going to be really enjoyable because there are a lot of positive people around the program.”

Driver Kuno Wittmer said that he feels like the team is ready to take the next step and be increasingly competitive on the track. The team’s fourth and final race of 2012 will be this weekend – the Petit Le Mans at Road Atlanta (Braselton, Ga.). It’s the final tune-up for a full ALMS schedule in 2013 for the two-car team.

“We’re now entering phases where we can actually compete for positions,” Wittmer said. “If we can shoot for a strong top-five finish at Road Atlanta that would be extraordinary. I think we have everything in place to do such things. Number one is the reliability of the SRT product with the Viper. It’s shown great reliability in the three races. Second, everybody is working so well together. It’s great harmony on the team and that’s going to be so important for us at Petit and also for 2013.”

Tommy Kendall and Marc Goossens have teamed in the first three races while Wittmer has shared seat time with Dominik Farnbacher. With the Petit Le Mans a 10-hour event, Team Viper’s stable expands to six drivers for Road Atlanta.

Ryan Hunter-Reay, 2012 IZOD IndyCar Series champion, and Jonathan Bomarito will make their debut in the SRT Viper GTS-R at Road Atlanta. Chrysler Road Racing Manager Gary Johnson says he is looking forward to Hunter-Reay and Bomarito getting behind the wheel and sees positives from the extra pit stops during the 10-hour endurance race.

“This will be the first race for Ryan and Jonathan,” Johnson said. “They’ve had some practice in the car before the race but as far as putting a lot of miles on the car, they haven’t had that much of an opportunity. This will give them a good chance to get comfortable with the car.

“Another thing that we’re looking at is the amount of pit stops that we will have to make. Our crew has really done a lot of work in bringing our pit stop time down to a competitive level. Obviously, with the number of pit stops that you’re going to have to make, that can make a big difference.”

Kendall says competing at Road Atlanta is a big step but perfect for the team.

“It’s almost the perfect next step for us because the season starts with a huge race at Sebring,” Kendall said. “So to have experience at doing more than a four-hour race is important. We’re looking forward to Road Atlanta. It’s a real test of everyone and the cars. I would say it’s kind of the perfect next step and a big one.”

Corvette Racing looks to finish with a flourish at Road Atlanta